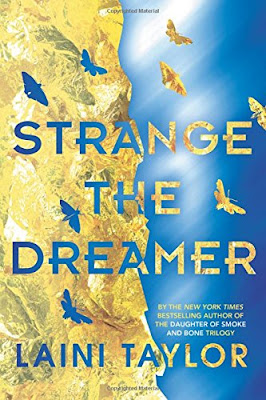 STRANGE THE DREAMER BY LAINI TAYLOR

The dream chooses the dreamer, not the other way around--and Lazlo Strange, war orphan and junior librarian, has always feared that his dream chose poorly. Since he was five years old he's been obsessed with the mythic lost city of Weep, but it would take someone bolder than he to cross half the world in search of it. Then a stunning opportunity presents itself, in the person of a hero called the Godslayer and a band of legendary warriors, and he has to seize his chance to lose his dream forever.
What happened in Weep two hundred years ago to cut it off from the rest of the world? What exactly did the Godslayer slay that went by the name of god? And what is the mysterious problem he now seeks help in solving?
The answers await in Weep, but so do more mysteries--including the blue-skinned goddess who appears in Lazlo's dreams. How did he dream her before he knew she existed? and if all the gods are dead, why does she seem so real?
In this sweeping and breathtaking new novel by National Book Award finalist Laini Taylor, author of the New York Times bestselling Daughter of Smoke & Bone trilogy, the shadow of the past is as real as the ghosts who haunt the citadel of murdered gods. Fall into a mythical world of dread and wonder, moths and nightmares, love and carnage.
Welcome to Weep. 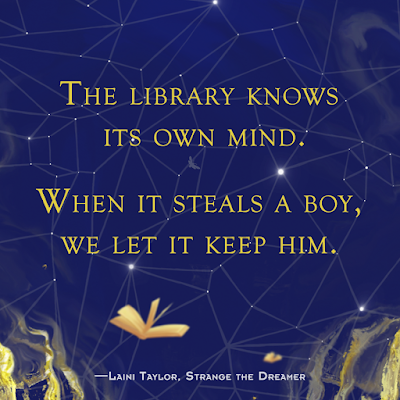 I'm generally not a band-wagoner. I get quite wary any time I see others going gaga over a book or an author. We've all been burned by following hype at least once right? After reading STRANGE THE DREAMER I'm kicking that part of myself that shies away from anything that seems too popular for not starting to read Laini Taylor sooner. Believe the hype people!

Rich fantasy worlds in YA can oft times begin to feel like the same influences over and over. Comfortable but sometimes a little lackluster. STD (err, worst abbreviation ever sorry) felt like nothing I've read before in YA or adult fantasy. The world building is lush, layer upon layer of mythology and culture forming a deeply captivating realm. Further, Taylor has created a cast of characters with backstories so poignant it can be painful to read in the best kind of way.

It's a rare book that I spend a few months slowly nibbling because it is so good I want to savor it. STD was very much that book for me and I'm glad I took my time. By the final page I was breathless with anticipation and emotionally wrung out. It's packed with mystery, romance, one seriously make-your-skin-crawl villain, and written so elegantly I can't even gush about anything specific. If you enjoyed Magonia by Maria Davhana Headley, An Ember in the Ashes by Sabaa Tahir, or Roar by Cora Carmack this should most assuredly be your next read.