Review: None of the Above by I.W. Gregorio 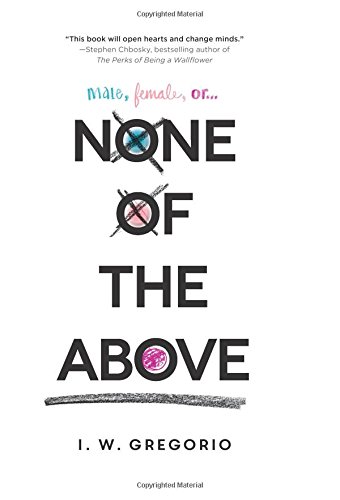 None of the Above by I.W. Gregorio

When Kristin Lattimer is voted homecoming queen, it seems like another piece of her ideal life has fallen into place. She’s a champion hurdler with a full scholarship to college and she’s madly in love with her boyfriend. In fact, she’s decided that she’s ready to take things to the next level with him.
But Kristin’s first time isn’t the perfect moment she’s planned—something is very wrong. A visit to the doctor reveals the truth: Kristin is intersex, which means that though she outwardly looks like a girl, she has male chromosomes, not to mention boy “parts.”
Dealing with her body is difficult enough, but when her diagnosis is leaked to the whole school, Kristin’s entire identity is thrown into question. As her world unravels, can she come to terms with her new self?
Incredibly compelling and sensitively told, None of the Above is a thought-provoking novel that explores what it means to be a boy, a girl, or something in between.

A great read that will open your heart and mind. (5 stars)

Feeling foreign in your own skin can be a pretty big part of being a teenager in general. But for LGBTQIA+ teens who don't see themselves in movies, comics, television, and books it can be even more of a struggle. I've been very pleased to find more and more wonderful reads featuring teens who are LGBTQIA+ sometimes even where it wasn't the central focus of the character's plot (they just are and it's no big deal) which is awesome. The world is diverse and as a reader I just really enjoy experiencing perspectives that are different from my own so I actively look for them.

NONE OF THE ABOVE was actually the first time I've read a book about an intersex character. I knew a bit about what intersex means and as a bit of a science geek I've always found the science of it to be really interesting. I'd never experienced it through a character before and I know it won't mirror every intersex teen's experiences but Kristin felt so real to me. At times it was painful to see how alien she felt and if ever I could have jumped in to support a fictional character I think this would be it.

A great exploration of gender and identity, NOTA, was also a story about family, friendship, and learning to loving yourself even when you feel unlovable. It was a really great read, one I am sure to recommend often to teen YA readers in particular, but also to anyone who is raising a teenager, teaches teenagers, or was once a teenager.
Posted by Rhianna at 6/22/2017