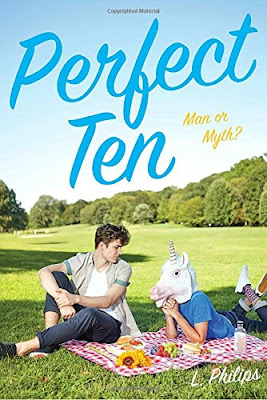 Who is Sam Raines's Perfect Ten?
It’s been two years since Sam broke up with the only other eligible gay guy in his high school, so to say he’s been going through a romantic drought is the understatement of the decade. When Meg, his ex-Catholic-turned-Wiccan best friend, suggests performing a love spell, Sam is just desperate enough to try. He crafts a list of ten traits he wants in a boyfriend and burns it in a cemetery at midnight on Friday the thirteenth.
Enter three seemingly perfect guys, all in pursuit of Sam. There’s Gus, the suave French exchange student; Jamie, the sweet and shy artist; and Travis, the guitar-playing tattooed enigma. Even Sam’s ex-boyfriend, Landon, might want another chance.
But does a Perfect Ten even exist? Find out in this delectable coming-of-age romcom with just a touch of magic.

Is his Perfect Ten a unicorn? (4 stars)

A cute blend of magical realism, young adult rom-com, and a look at the challenges of teenage relationships when they get complicated by expectations, PERFECT TEN, is really good.

I struggled a little with the characters in this book and it took me most of it to figure out why. They frustrated me because they were so well developed and thus, realistically flawed! Sometimes I just really wanted to give Sam a good shake and tell him to... well, I don't want to spoil anything. But suffice it to say that if you have ever stood by a friend through their complicated romances you're sure to find this read to be much like that.

With a cast of potential Perfect Tens for Sam to develop his relationships with you're sure to pick a favorite. Charming and enchanting Gus, shy and artsy Jamie, flirtatious and wicked Travis, and familiar and special Landon could each be great with Sam. But it's never as simple and though at times the plot felt particularly circular and draggy I found the overall journey to be enjoyable.

If you're new to LGBTQIA+ romances I think this is a really great read for a first timer. It's funny, sweet, and has enough depth to make it more than just a fluffy beach read.