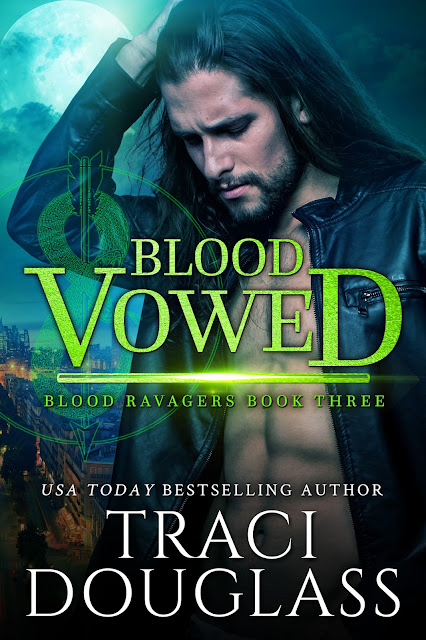 BLOOD VOWED by Traci Douglass is a dark and sexy ride with an otherworld ex-assassin on a mission to atone for the sins of his past, and the woman who holds both his only means of escape and the keys to his ultimate salvation. This exciting installment in the Blood Ravagers series is perfect for fans of BLACK DAGGER BROTHERHOOD by J.R. Ward and IMMORTALS AFTER DARK by Kresley Cole.

Praise for the Blood Ravagers:
“Fifty Shades of Grey” meets “Sons of Anarchy” in Traci Douglass’s “Blood Bound.” The first book in the Blood Ravagers series, “Blood Bound” brings us to a world where humans and Otherworlders live side by side but with an uneasy truce. An exciting read from beginning to end. It’s steamy and sexy while also hair-raising and fearsome at the same time.” - MARI D., NETGALLEY REVIEWER, 5 STARS
“Yes, yes, and more yes. I'm in love with this series. Give me more!” - ERIN M., NETGALLEY REVIEWER, 5 STARS

Reverend “Rev” Walker, expected some backlash after he foiled The Council’s attempts to overthrow the Blood Ravager Biker Gang. What he hadn’t expected was to wake up in the last place he ever wanted to see again—a dank cell of The Council’s Siberian dungeon. Drained and chained, he faces certain death if he can’t escape from the hellish prison. Now, his only means of escape depends on him accepting help from a fellow prisoner, a woman whose very existence is a lie and the only one capable of awakening Rev’s long-dormant heart.Claire Deveraux is Dygarian, a race of shadow-shifters who have been slandered and hunted to extinction by The Council. But Claire has used her years of enslavement well, reading her captors’ secret texts and hearing their whispered secrets. Now, after being locked up for a crime she didn’t commit, she plans to use her knowledge of the dungeon’s maze-like interior to gain her freedom, or die trying. Then a new prisoner arrives, a man Claire has dreamed of and knows in her heart is her destined mate, if only she can break through his walls.On the run and threatened from all sides, will Rev and Claire learn to trust each other and their growing feelings for one another before it’s too late?


Gods fangs, have I ever been in so much pain?

Slowly, agonizingly, Rev forced one swollen eye open. Nothing but darkness surrounded him, crowded tight with the dank stench of rotting flesh, unwashed bodies, and mildew. Invisible legs skittered along the skin of his temple and he tried to raise his hand to brush whatever it was away, only to find his wrists shackled with heavy iron cuffs.

Tried his legs and found the same.

Never in his eons-long life had he ever been in such agony.

Images flashed through his beleaguered brain. Endless torment. The satisfied grin of Elon, his Council tormentor, the man’s bloodstained teeth. The scrape of nails, digging deep. A bark of laughter followed by the terrible scents of brimstone and sweat and fear. One brutal emotion after another bombarded him—disgust, rage, utter violation. Desperate to avoid a breakdown, he’d built a brick wall around his screaming heart and soul.

The three members of the Council—Auric, Elon, and Jareth—had beaten him for hours, relentless, brutal, stopping only long enough to allow Rev to heal enough to start all over again. Most every bone in his immortal body felt broken, bruised, or otherwise battered.

The Council was thorough in their punishment.

And he’d evaded them for far too long. 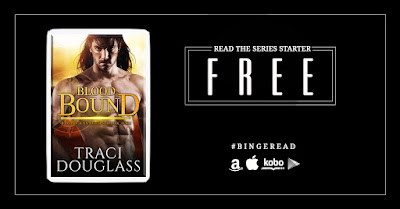 There was no doubt in his mind that they had rejoiced at his capture, relished bringing him back here, locking him away in what would surely become his final grave. Still, he couldn’t bring himself to regret what he’d done. Dex and Liz had proven themselves worthy, brave, true.

Before this was over, Rev hoped to prove those things about himself as well.

To pay back the three bastards of the Council for all the evil they’d wrought on the otherworld and perhaps earn his eternal rest at last.
Rest…
With a sigh, he leaned his head back against the rough stone. They’d taken his hat, his clothes, everything he owned, except for the filthy loin cloth slung around his hips. He couldn’t remember the last time he’d fed, bathed, seen the sun or the moon.

Time had lost all meaning in here.

As his eyes slid closed once more, he prayed for a few hours of rest before they came for him again and the torture started anew.

“Hello?” a voice whispered through the shadows, so quiet it sent a shiver down his spine.

Rev opened his one good eye, glanced around, but spotted nothing.

He was alone. Probably a hallucination.

“Hello? Are you still alive in there?”

His head snapped up. He searched through the shadows again. “Who’s there?”

“So you are alive.” The voice sounded hesitant and decidedly…female.

“Unfortunately, yes.” He strained against his bonds, to no avail. “Who are you?”

She laughed, his mystery woman. “The one who will help you escape.”
The blood in Rev’s veins ignited, as if touched by a lit match. His heartbeat thumped loud in his ears, faster, faster, the need to break his restraints, stalk to the bars of his cell and rip them all to shreds, overwhelming him. He needed to see her, would die if he couldn’t.

An extreme reaction, yes, especially for him.

As was his weird, nearly excruciating awareness for another being. The uniqueness made it no less uncontrollable or unstoppable. From the first word, his entire universe had centered on this woman. The huskiness of her tone, the promise of absolute pleasure, the come-hither invitation that made his body grow hard…

Other Books in the Blood Ravagers Series 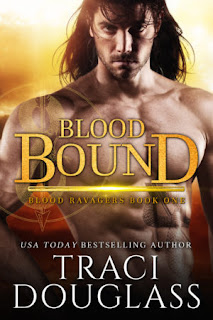 Anna Frost had a bad feeling when her twin sister, Liz, told her she’d run off with a member of the notorious Otherworld biker gang, the Blood Ravagers. And her unease skyrockets when her sister subsequently vanishes. The police have no authority and little interest, so Anna decides to take matters into her own hands by infiltrating the group to discover for herself what happened to Liz, where she meets….
Dante, half demon, half human. A mix of two worlds, accepted by neither, he’s had no choice but to learn the hard way how to play whatever side of the fence kept him alive during his nearly 500 years of existence. Now, as second-in-command of the Blood Ravagers biker gang, his survival depends on keeping his humanity a secret. Dante’s ultimate goal is to fulfill the vows he made over two centuries ago to create a world where half-breeds can live in safety and equality.
But when sheltered schoolteacher Anna finds unexpected, white-hot passion in the arms of Dante, will her quest for the truth cost him more than he ever bargained for? Or will they find a way to save Liz – and their love – together?
Book 1 is available at Amazon | Barnes & Noble | Kobo | iBooks 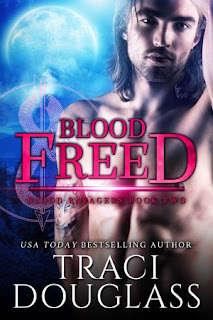 Elizabeth “Liz” Frost has always been the wild one. But now, with a niece or nephew on the way and her promise to become half of the new psychic Oracle team for the Blood Ravagers Biker Gang, she’s ready to turn over a new leaf. And what better way to start than by answering the call when gang leader Dante needs help? Her mission: to travel cross-country to get the information the gang needs to complete the Oracle Binding Ceremony. Should be easy, right? Except for the incredibly tempting lone-wolf shifter named Dex who’ll be her riding partner and protector on the journey.
Dexter “Dex” MacCallahan is tasked with guarding Liz Frost, one of the gang’s beautiful and bewildering new psychics. Dex can’t refuse the mission, but there’s one small problem. The time of his Rut is approaching, a rare occurrence where male wolf-shifters must physically bond with their chosen mate or face certain insanity and death. It could cost him not only the new life he’s built, but also his battered, scarred heart.
Together, Dex and Liz must search for the information they need before his old nemesis and a rival gang annihilates all they hold dear. But when the simmering chemistry between them boils over into searing hot passion, will they risk losing their hearts to save the ones they love?
Book 2 is available at Amazon | Barnes & Noble | Kobo | iBooks

Traci is a USA Today Bestselling Author of Contemporary and Paranormal Romance. Her stories feature sizzling heroes full of dark humor, quick wits and major attitudes and heroines who are smart, tenacious, and always give as good as they get. She holds an MFA in Writing Popular Fiction from Seton Hill University and she loves animals, chocolate, coffee, hot British actors, and sarcasm—not necessarily in that order.
Connect with Traci at her Website | Instagram | Facebook | Twitter | Pinterest | Google Plus | Book Bub