The heart’s a resilient beast…

SINGLE MALT is perfect for fans of Mr. & Mr. Smith by HelenKay Dimon and the Cut & Run series by Abigail Roux and Madeleine Urban. 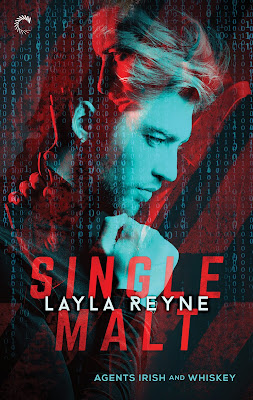 Eight months after the car crash that changed everything, FBI agent Aidan Talley is back at work. New department, new case and a new partner. Smart, athletic and handsome, Jameson Walker is twelve years his junior. Even if Aidan was ready to move on—and he's not—Jamie is off-limits.
Jamie's lusted after Aidan for three years, and the chance to work with San Francisco's top agent directly is too good to pass up. Aidan is prickly—to put it mildly—but a growing cyber threat soon proves Jamie's skills invaluable.
Jamie's talents paint a target on his back, and Aidan is determined to protect him. But with hack after hack threatening a high-security bio-containment facility, time is running out to thwart a deadly terrorist attack. They'll have to filter out distractions, on the case and in their partnership, to identify the real enemy, solve the case and save thousands of lives, including their own.
Find out more at: Carina Press | Amazon | Google Play | Kobo | iTunes| B&N| Goodreads


Aidan came to slowly. The acrid smell of smoke stung his nostrils, something wet dripped down the side of his face, and his head throbbed like someone had taken a hammer to it. Eyes closed, shattered glass tinkled all around as he lifted a hand to his temple. Massaging the point of pain, his fingers came away sticky and wet.
His aching brain was slow to catch on. One by one, it put together the pieces, and the terrible familiarity of his situation came into focus, knotting his gut and tearing at his chest.
Blood.
Broken glass.
Engine smoke and airbag fumes.
Not one but two SUVs barreling toward them.
Car accident.
Again.
Present events collided with past memories of a similar, horrible night eight months ago.
Tom clutching the dashboard with one hand and the handle above the Tesla’s passenger door with the other, bracing for impact, his face aghast in the oncoming high beams of the vehicle speeding toward them.
Gabe’s frightened black eyes meeting his own in the rearview mirror, a second before his body was thrown sideways in the back seat, the crash of his skull against the window louder in Aidan’s mind than the grinding metal and splintering glass.
Aidan’s insides tossing and turning with each flip of the car, free fall at its most terrifying. The scrape of asphalt against his arm, metal piercing skin, twisting and turning, as death pinned him in its grip.
A weak gurgling cough yanked Aidan back to the present. 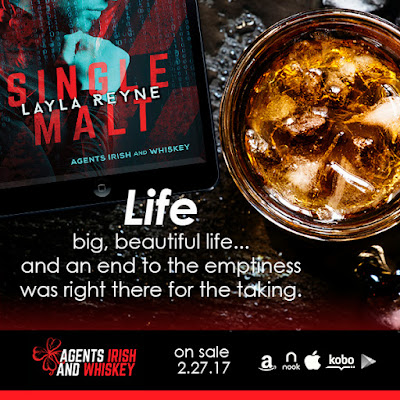 Whiskey.
Eyes popping open, he squinted against the bright morning light and gasped at the pain piercing his head and radiating down his right side. Fighting the blackness encroaching on the edges of his vision, he turned his head left, searching for his partner.
His partner who’d driven the Rover with stunt-worthy precision out of the way of two oncoming SUVs, through a barrier, and down a cliff into a ravine.
The hard landing had knocked Aidan out, but he’d woken upright and in one piece, relatively. Walker, just coming to, was held back against the driver’s seat by the taut seatbelt. He had his left hand up by his hairline, and when it fell limply into his lap, his fingertips were covered in blood. The strained belt snapped, and he began to crumple forward.
“Whiskey.” Swatting the deflated airbags out of the way, Aidan reached over to hold Walker upright, pressing him back into the seat. “Stay with me.”
Groaning, Walker rotated his head, his lashes dark against colorless cheeks. Bright red blood seeped from a gash at his hairline.
Ignoring the pain in his side and the anvil in his head, Aidan unbuckled his seatbelt and stretched across the console to hold Walker’s face in his hand, giving his unshaven cheek a firm but careful pat.
“Come on, Jamie. Open those beautiful blue eyes for me.”
Walker’s forehead wrinkled and his eyelids fluttered open, the gaze beneath them hazy and unfocused. “Irish?”
Pure relief and blinding need propelled Aidan across the console. Fingers digging into Walker’s neck, he slammed their mouths together and tasted the precious life flowing from his partner’s lips. Aidan had wanted this the past three weeks, but he’d denied the attraction between them. Because they were partners. Because he was still grieving. But in the aftermath of this latest accident, too much like the one that’d stolen the last man he’d loved, Aidan needed to know the man beside him, the man he could but couldn’t love, was alive.
Walker gave a surprised jerk, then, catching on, angled his head and parted his lips, his warm breath rushing into Aidan’s mouth. Granted entrance, Walker’s slow kiss was no match for Aidan’s desperation.
For the fear that laced each swipe of his tongue.
For the longing that shook his fingers and caused him to groan.
For the darkness that grew closer with each stolen breath.
“You’ll be okay, Whiskey,” he whispered against his lips.
Relief for Walker’s safety, for his life, made Aidan’s slide into darkness smooth, not the tossing and turning of his nightmarish memories.“Irish, hold on,” was the last thing he heard before falling forward into Walker’s big body and letting oblivion take him.

A sexy, action-packed read that had me wanting the next book! --HelenKay Dimon, author of Mr. & Mr. Smith

With sharp writing, compelling characters, and an engaging plot, Single Malt is the M/M romantic suspense series I've been waiting for. - Santino Hassell, award-winning author of the FIVE BOROUGHS series 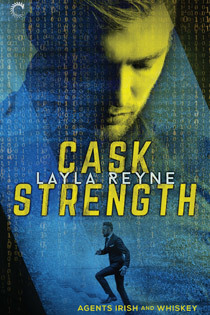 Professionally, the FBI team of Aidan "Irish" Talley and Jameson "Whiskey" Walker is as good as it gets, closing cases faster than any team at the Bureau. Personally, it’s a different story. Aidan’s feelings for Jamie scare the hell out of him: he won’t risk losing another love no matter how heart-tripping the intimacy between them. And loss is a grim reality with the terrorist Renaud still on their trail, leaving a pile of bodies in his wake.Going undercover on a new case gets them out of town and off the killer's radar. They're assigned to investigate an identity theft ring involving a college basketball team in Jamie's home state, where Jamie's past makes him perfect for the role of coach. But returning to the court brings more than old memories.As secrets and shocking betrayals abound, none may be more dangerous than the one Jamie’s been keeping: a secret about the death of Aidan’s husband that could blow his partner's world apart and destroy forever the fragile bonds of trust and love building between them.
Preorder now: Amazon | iTunes | Kobo | Google Play 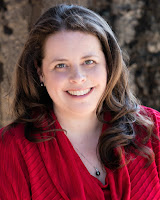 About Layla Reyne:
2016 RWA® Golden Heart® Finalist, Layla Reyne, was raised in North Carolina but now calls San Francisco home. She enjoys weaving her bi-coastal experiences into her stories, along with adrenaline fueled suspense and heart pounding romance. When she’s not writing stories to excite her readers, she downloads too many books, watches too much television, and cooks too much food with her scientist husband, much to the delight of their smushed-face, leftover-loving dogs. You can find her online at http://www.laylareyne.com/.
Connect with Layla: Website | Blog | Facebook | Twitter | Pinterest | Goodreads

Thank you for hosting! Happy Friday :)