2 Reasons PNR & SFR Readers Are Having a Great Day 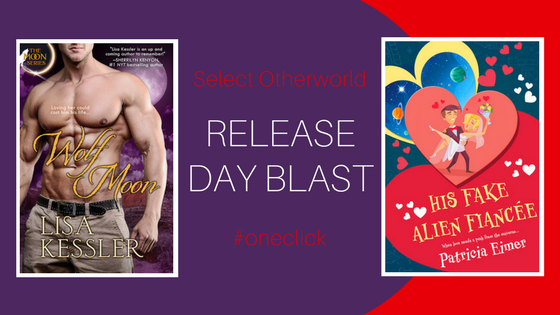 I am thrilled to help celebrate the release of two brand new Entangled Select Otherworld titles! First, wolf pack fans should get excited because Wolf Moon by Lisa Kessler is now available! (#TeamLuke) Second, if you're a fan of laugh-out-loud and romantic reads, then you're going to love His Fake Alien Fiancée by Patricia Eimer! Pick up your copies today!

As the last Pack member without a mate, Luke Reynolds has become an outsider. When he takes a job as the head horse trainer in Sedona, Arizona, he’s looking forward to starting a new life. But everything changes the night he finds a beautiful woman stranded on the side of the highway.

Raven Wood has been bitten and turned against her will. Luckily, her spirit is stronger than most, and she has every intention of escaping the Sedona Pack. Somehow. The sexy lone wolf who rescues her might be just the answer she’s looking for.

But the Sedona Pack Alpha has a mission, and unless Luke and Raven can stop him, they’ll lose everything.

Note: Each book in the Moon series is a standalone, full-length story that can be enjoyed out of order.

About Lisa Kessler: Lisa Kessler is an award winning author of dark paranormal fiction. Her debut novel, Night Walker, won a San Diego Book Award for Best Published Fantasy-Sci-fi-Horror as well as the Romance Through the Ages Award for Best Paranormal and Best First Book. Her short stories have been published in print anthologies and magazines, and her vampire story, Immortal Beloved, was a finalist for a Bram Stoker award. When she's not writing, Lisa is a professional vocalist, performing with the San Diego Opera as well as other musical theater companies in San Diego.

About His Fake Alien Fiancée:

Princess Perripraxis not only has to find a fiancé—and fast—she’s got to find one who doesn’t mind that her “no makeup” face has green and purple scales. Otherwise, Daddy Dearest has plans that don’t include Perri’s compliance. Candidate Number One: Her sexy human best friend, Brandt.

Bartender Brandt Turner didn’t need all those years in the army to teach him never to leave a man behind. Or an alien princess in need of a pretend fiancé. If she needs someone to play the lovesick fool to convince her dad to let her stay on Earth, well then, he’ll let the world think Cupid finally took him out.

But Perri’s father has no intention of playing nice—and he’s not above cruel and unusual alien torture to make things go his way. But Brandt is willing to complete the mission…however far he has to go.

Patricia Eimer is a suburban mom who has days where she feels like she’s barely hanging on. She currently lives in eastern Pennsylvania with her two wonderful kids and a husband that learned the gourmet art of frozen pizzas to give her more time to write. When she’s not writing—or shuttling her children to a hundred different places a day-- she can be found trying to cook (and sometimes blowing up hard boiled eggs), reading and arguing with her dogs about plot points. Most days the Beagle wins but the Dalmatian is in close second and her mastiff puppy is making a break for the inside. Patricia meanwhile is a longshot fourth. When she’s not writing she can be found on Facebook, at her website (www.patriciaeimer.com) or on Twitter (@PatriciaEimer) . She is also a connoseiur of really bad science jokes.

Thanks for sharing Wolf Moon Rhi!