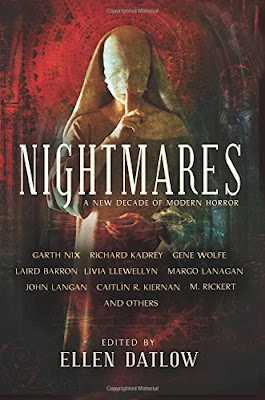 Notes: Review copy received via NetGalley.
Anthology, Short Stories, Horror, Occult
Digital/Print (432 pages, TACHYON PUBLICATIONS)
Unlucky thieves invade a house where Home Alone seems like a playground romp. An antique bookseller and a mob enforcer join forces to retrieve the Atlas of Hell. Postapocalyptic survivors cannot decide which is worse: demon women haunting the skies or maddened extremists patrolling the earth.
In this chilling twenty-first-century companion to the cult classic Darkness: Two Decades of Modern Horror, Ellen Datlow again proves herself the most masterful editor of the genre. She has mined the breadth and depth of ten years of terror, collecting superlative works of established masters and scene-stealing newcomers alike.

Something for every horror reader. (3 stars)

Anthologies are notorious for earning 3-star ratings with few exceptions and NIGHTMARES: A NEW DECADE OF MODERN HORROR is no different.

I'm admittedly only a casual horror reader, partaking once in a blue moon to break free from genre over-saturation. When I do step into the horror shelves I tend to enjoy tales with supernatural and paranormal elements, tales of mental illness both real and imagined, and the kind of chillers that keep you up at night because they make your mind fill in the blanks so much you're creeping yourself out. There were enough of those here to sate my desires and for that I was able to give it the 3-star rating. Unfortunately, there were a few stories peppered in that involved pedophilia and incest, elements that I find repugnant on a visceral level. I don't mind some gore or even some well plotted violence but I simply cannot read about sexual violence against children without becoming physically ill. If the same bothers you please proceed with caution.

Overall, some were quite enjoyable, a few were awful, and several were forgettable. For me the standout was "Closet Dreams", a kidnapping tale that left me breathless. I also found "Was She Wicked? Was She Good?" exceptionally creepy.