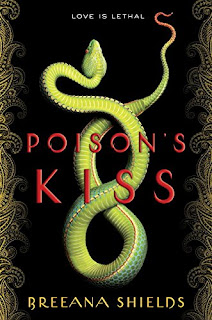 Young Adult, Fantasy, Folklore
Digital/Print (304 pages, RANDOM HOUSE)
A teenage assassin kills with a single kiss until she is ordered to kill the one boy she loves. This commercial YA fantasy is romantic and addictive—like a poison kiss—and will thrill fans of Sarah J. Maas and Victoria Aveyard.
Marinda has kissed dozens of boys. They all die afterward. It’s a miserable life, but being a visha kanya—a poison maiden—is what she was created to do. Marinda serves the Raja by dispatching his enemies with only her lips as a weapon.
Until now, the men she was ordered to kiss have been strangers, enemies of the kingdom. Then she receives orders to kiss Deven, a boy she knows too well to be convinced he needs to die. She begins to question who she’s really working for. And that is a thread that, once pulled, will unravel more than she can afford to lose.
This rich, surprising, and accessible debut is based in Indian folklore and delivers a story that will keep readers on the edge of their seats.Author Site: website


Confession time... I may have picked this book with a heavy influence coming from that strikingly beautiful snake on the cover. The story sounded like something I had read before but sometimes that's fine. After a lot of reads in recent months that left me disappointed POISON'S KISS was an unexpected gem.

What made this story really work for me was that it was engrossing. I'd burn away an hour and not realize I'd been reading so long because it was never slow and the characters were interesting. Shields masterfully unveils the secrets of her world in a way that makes it hard to put it down.

It's an odd complaint but the main reason I didn't love it was that it felt like it would be a stand alone, only to set up for a second book at the very end. There aren't enough great YA fantasy books that are stand alones so I found that felt rushed and didn't compel me to read the next entry.

If you enjoyed Three Dark Crowns by Kendare Blake or The Star-Touched Queen by Roshani Chokshi I think you'll love this one.

This sounds like something I'd really enjoy. It's good to know that it's not a standalone, even if it seems like one---that can sometimes be really frustrating to me, so it's good to know it ahead of time.