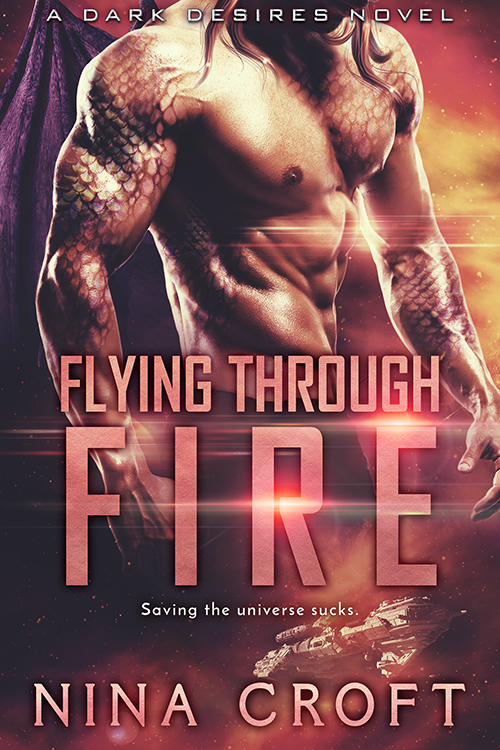 Love scifi romance? Love paranormal romance? Just plain love fantastic romance writing? I've been a fan of Nina since the first Dark Desires book released. This past spring I also had the pleasure of meeting her in person and she was so fantastic! If you haven't read a Nina Croft book yet don't waste another minute. You can thank me later. ;) -- Rhi

For ten thousand years he’s done his duty. Now he wants something for himself…

Winged monsters have been seen in the skies, and a pestilence follows in their wake, threatening the very survival of mankind. Only the crew of the Blood Hunter knows where they come from, and only one man has the power to send them back—Thorne, a human/dragon hybrid in possession of mental powers beyond comprehension.

Candace Decker doesn’t need anyone to look after her—she’s a badass werewolf more than capable of protecting herself and those she loves. All the same, she’s always been drawn to Thorne’s strength. In an uncertain world, he’s the one man who makes her feel safe. And what Candy wants, she usually gets.

But while Candy is tenacious, Thorne’s willpower has been honed over ten thousand years. He might want her, but the last thing he needs is an infatuation with a young, impetuous werewolf. Candy makes him lose control, and that could have disastrous consequences.

As the threat escalates and they become separated by time and space, Candy must find a way back to him, because while Thorne alone has the power to defeat the dragons, only together can they finally bring peace to the universe.

Please enjoy a deleted scene from Flying Through Fire:

In Flying Through Fire, book 6 in my Dark Desires series, we have the whole cast of the series appearing at some point or other. I thought it would be nice to get inside a few of their heads, see how they were doing, what they were thinking…
However, my editor believed that these scenes detracted from the two main characters and were a little jarring, and so the scenes were removed. This one was from Saffira’s (the heroine of book 4, Temporal Shift) point of view.

The door slid shut behind her. Saffira leaned against the wall of the corridor and tried to slow her breathing. Sweat pricked her forehead, heat from the vision.
Thorne had burned because of her. She’d been powerless to help him, to save him.
It’s not real.
Not all her visions came true. Maybe this was a warning of what might be.
And she’d already lost Thorne. He’d closed himself off. He’d given ten thousand years to his people. Now they were dead. Perhaps he was right, and that meant he was free. They were both free.
She pushed herself up, hating the weakness that made her stumble. The visions drained her strength, but she had to sort herself out before she saw Devlin or he would want to know what was up, and what could she say?

Be sure to pick up the rest of the series:

The year is 3048, Earth is no longer habitable, and man has fled to the stars where they’ve discovered the secret of immortality—Meridian. Unfortunately, the radioactive mineral is exorbitantly expensive and only available to a select few. A new class comprised of the super rich and immortal soon evolves. The Collective, as they’re called, rule the universe.

Two-thousand-year-old Ricardo Sanchez, vampire and rogue pilot of the space cruiser, El Cazador, can’t resist two things: gorgeous women and impossible jobs. When beautiful Skylar Rossaria approaches him to break a prisoner out of the Collective’s maximum security prison on Trakis One, Rico jumps at the chance. Being hunted by the Collective has never been so dangerous–or so fun!

Tagline: Eternal love is the greatest risk of all.

Breaking assassin Jonathon Decker out of a maximum-security prison on Trakis One seemed like a good idea at the time. Now, pursued across space by the two most powerful factions in the universe, the crew of El Cazador are having second thoughts. They’d like to give him back. Unfortunately, that is no longer an option.

Jon is used to working alone. Now, he’s stuck on the space cruiser El Cazador until he can work out just what he’s supposed to know that puts him on everybody’s most-wanted-dead list. He’s not happy that the crew includes a runaway priestess with designs on his virtue—such as it is. Jon likes women, but he gave up the role of protector a long time ago, and Alexia, High Priestess of the Church of Everlasting Life, is an accident waiting to happen.

After twenty-four excruciatingly boring years of doing her duty, Alex is finally having some fun. She never meant to run away—it was a rash impulse—and she means to go back—eventually. But first, she’s going to squeeze enough excitement out of the situation to last her a lifetime. And what could be more exciting than a stunningly gorgeous werewolf?

Meanwhile, the Church are chasing their missing priestess, and the Collective are pursuing their escaped assassin. Being hunted has never been more deadly…or more fun.

Tagline: Eternal love is the greatest risk of all.

Captain Tannis of the starship El Cazador is part snake, part human, and—according to some—all bitch. She is one job away from her lifelong goal—to achieve the immortality she craves. The assignment: protecting the most powerful man in the Universe.

After five hundred years, Callum Meridian, founding member of the Collective, is bored out of his mind. Until he realizes he’s physically changing—into what, he isn’t sure. Callum is determined to discover the truth, but his own people will stop at nothing to prevent it from coming out.

With a coup brewing and the crew of El Cazador close to tossing him off the ship, Callum turns to Tannis. Sparks fly as they work together to make it out alive. But can Callum really trust the one woman hell bent on using him? Defying death has never been more dangerous, more sexy, or more fun.

Tagline: Caught between destiny and desire…

After diving into a black hole in search of the source of Meridian, the key to immortality, the crew of the Blood Hunter finds themselves stranded in an alternate universe.

Engineer Devlin Stark doesn’t want immortality. He just wants to live long enough to get his revenge on the man who murdered his brother. Now, he’s trapped in a strange world with a crazy woman who claims he’s fated to be her lover.

Saffira Lourdes has a destiny: to save humanity and lead her exiled people to the Promised Land. Haunted by visions of the past and future, she’s been sustained through the years by a dream lover. Unfortunately, Devlin doesn’t believe in fate. But it’s obvious there’s a connection between them, one that will soon be tested by the limits of time and space. Saffira is about to make the crew of the Blood Hunter an offer they’ll find impossible to refuse.

They’re heading back to Earth, and they’re going back in time…

Tagline: She’s his last chance for redemption…if she doesn’t kill him first.

About Blood and Metal:

Copilot of the Blood Hunter, Daisy is a newly-turned vampire, and she’s hungry. Really hungry and it’s interfering with her plans for revenge. Unfortunately, the only thing that can distract her from said hunger is sex…which is a problem when she can barely refrain from draining any man dry within moments. But old flame Fergal Cain might just be the sexy-assed solution to her problem.

Part human, part cyborg, and with a poison coursing through his system, Fergal’s running out of time to find the scientist who has the cure. Unfortunately for him, the misfit crew of the Blood Hunter put a serious kink in his plans. And if the poison doesn’t kill him, the hot little vamp he can’t resist might do the honors herself…


Growing up in the cold, wet, north of England, Nina Croft spent a lot of time dreaming of faraway sunnier places and ponies. When she discovered both, along with a whole load of other things, could be found between the covers of a book, her life changed forever.

Later, she headed south, picked up the perfect husband along the way, and together they volunteered to work in Africa. There they discovered a love of exotic places and a dislike of 9-5 work. Afterward they spent a number of years travelling (whenever possible) intermingled with working (whenever necessary.) Eventually they stumbled upon a remote area in the mountains of southern Spain and the small almond farm they now call home.

Nina spends her days reading, writing and riding her mare, Gencianna, under the blue Spanish skies—sunshine and ponies. She reckons this is proof that dreams really can come true if you want them enough.