My dearest RhiReaders, you may or may not remember my occasional mentions of my husband's adventures in falconry here on the blog in the past. Having his bird Mara in our life is the main reason I decided to give Flip a read and I am so glad I did. Please check out my review and pick up your copy today! -- Rhi 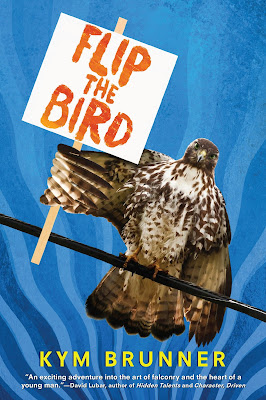 Mercer Buddie wants two things in this world: a girlfriend and the chance to prove to his master falconer father that he’s not a flake. With hunting season fast approaching, fourteen-year-old Mercer has only a short time to work with Flip, a red-tailed hawk he irreverently named to show his dad that falconers don’t have to be so serious all the time.

When Mercer meets Lucy, he falls hard for her gorgeous looks and bubbly personality. He thinks his love life is about to take flight, until he discovers that Lucy and her family belong to a fanatical animal-rights organization called HALT—a group that believes imposing any sort of restrictions on animals is a form of cruelty. Mercer soon realizes that if he wants to keep seeing Lucy, he’ll need to keep his love of falconry and his family’s raptor rehabilitation center a secret from her, and Lucy’s involvement with HALT from his family.

With humor and honesty, Mercer’s story shows how growing up means making difficult choices…and sometimes, being rewarded in unexpected ways.

You'll flip for this blend of humor and heart! (5 stars)

Having been a bystander of the falconry apprenticeship process with my partner (now a general) and having a master falconer cousin I couldn't resist giving FLIP THE BIRD a read. Falconry is such a fascinating sport—way more work and dedication than I have the desire to take up—and having some first hand knowledge I felt I could give it a pretty fair shake for facts while enjoying a YA read.

Mercer is a charming boy that has a lot of tough choices to make both as an apprentice falconer and as a young man trying to win over a pretty girl. He makes many mistakes along the way but grows wiser for them. I don't often read first person narratives from male characters but I quickly grew to enjoy Mercer's voice. In fact, I enjoyed this so much that as soon as I finished it I walked into my own teen son's room and told him I think he should read it.

As a mom I think this would make a good option for a reluctant teen reader. It has heart and humor while giving accurate facts about a sporting world not commonly known this intimately in the US. I can't say every aspect of falconry is perfectly portrayed as some aspects vary from state to state and so forth but if this doesn't make you want to learn more about falconry I don't know what will.

I much recommend this book, it was a very enjoyable read that left me grinning and eager to share it with my readers. 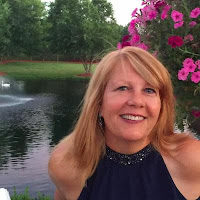 Kym Brunner dreams entire novels in her head, but needs about a year to write it all down. She wishes there was an app for this. She's addicted to chai tea, going to the movies, and reality TV. When she's not reading or writing, Kym teaches 7th grade full time. Her article, Cracking Down on Multiple POVs: Surrender and Nobody Gets Hurt, appeared in Writer’s Digest online (July, 2014). She is the author of the three YA novels listed below. She lives in the Chicago area with her family and her two trusty writing companions, a pair of Shih Tzus named Sophie and Kahlua. Keep in touch by following her on Facebook (Author Kym Brunner), Twitter (@KymBrunner), or at her website, http://www.kymbrunner.com.

Thanks so much for reading AND passing it along to your son! 💙 Glad it passed muster with someone knowledgeable about falconry. I did work with many falconers (one who read a draft many years ago), so any mistakes are my own. :) KYM