Today we have the release day launch for The Time Traveler’s Christmas by Amy Jarecki! Check out the excerpt Amy is sharing, enter her giveaway and grab you're copy today!

About The Time Traveler’s Christmas: 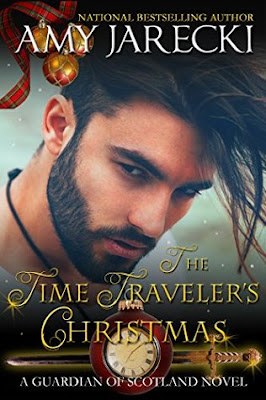 A man’s life can fall apart in an instant…

Tougher than oxhide, Lachlan Wallace can take about anything except a breakup call from his wife two minutes before competing in the Karate Championship of the World. Arriving home with a loss, he agrees to watch his uncle’s cat over the holidays. Or so he thinks—until he awakes on a fourteenth-century battlefield beside a woman fighting for her life.

Taken from her at the age of two, Lady Christina de Moray hasn’t seen her son in thirteen years. While traveling with Robert the Bruce’s army to exchange an English prisoner for the lad, a battle erupts. Losing the fight, Christina is rescued by a mysterious warrior while the English escape with her son yet again.

And never bet against the potency of passion…

Left with no way back to the twenty-first century, Lachlan agrees to help Christina rescue the lad from his English captors. If the heir is not returned by Christmas next, the Bruce will make his decision whom to grant the de Moray lands, including Lady Christina’s hand. Once his duty is fulfilled, Lachlan hopes to discover a way home—as long as he keeps his mind on the goal and ignores his growing love for the spirited woman who gives him her trust—and her heart.


Grab your copy today! The Time Traveler’s Christmas Rise of a Legend In the Kingdom’s Name


Crouched in a defensive stance, Lachlan Wallace’s mind refused to focus. Sweat streamed from his brow, drained into his eyes and blurred his vision. His breathing rushed through his ears like an angry river. Everything around him moved in slow motion. He rubbed his forearm across his face and his white sleeve came back with a swath of blood.
But nothing hurt, except Lachlan’s heart.


Shifting his gaze to the time clock—five seconds left—the red numbers frozen in place while the judges consulted with each other to confirm the three points given to the American for his last kick. Maybe that’s what caused the bleeding. Lachlan didn’t care.

He switched his sights to the scoreboard. Tied, UK nine, US nine. The American contender across the mat stared with the hunger of a rabid dog. Still, Lachlan could take him. He just needed a moment to focus.
Damn. Out of the starting gates, he’d suffered a vicious kick to the gut, but that wasn’t the reason for a ton of lead sinking to his toes.
Just hang in there. I have to prove her wrong about something.
The referee sliced his hand downward—the signal to engage. Lachlan’s legs moved like four hundred pound weights hung from his thighs. The American approached, growing blurrier by each fraction of a second. Holding his defensive stance, Lachlan shifted for a countermove as his opponent slightly raised his hind foot to his toes.
A kick.
Anticipating the move, years of training took over and Lachlan spun to the right, aiming a left roundhouse kick to the American’s head. A millisecond off, the man ducked and rolled away from what could have been the kick to end the fight. Lachlan should have continued with the attack, pinning the man to the mat and issuing a three-point punch to the face, but Angela’s voice rang in his head.
“I’ve filed for divorce. John and I moved your things to Container Village on Falkirk Road. You’ll be hearing from my solicitor. You’re such a loser. Don’t try to call. I’ve blocked your phone.”
The rush of Lachlan’s breathing deafened his ears.
Who the fuck is John?
The unanswered question burst into a million stars as the American’s heel collided with Lachlan’s temple.

An Amazon bestselling author, Amy Jarecki adores Scotland. Though she now resides in southwest Utah, she received her MBA from Heriot-Watt University in Edinburgh. Winning multiple writing awards, she is focused on the genre of Scottish historical romance. Amy loves to write steamy edge-of-your-seat action adventures with rugged men and fascinating women who weave their paths through the brutal eras of centuries past.

Enter Amy’s Giveaway:
a Rafflecopter giveaway
Posted by Rhianna at 10/04/2016

I liked the excerpt, thank you.