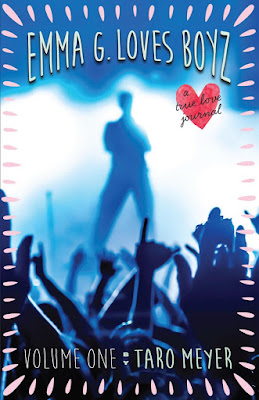 Emma G. is CRAZY about Aaron, lead singer of Boyz3000. Of course, she doesn’t actually know him, but so what? Feelings are feelings. That is until Josh appears… and he’s soooooo CUTE. Navigating her two crushes and her middle school life, especially with eighth-grade hater Renee around, is a challenge. And oh yeah, she’s got to earn money for an AWESOME trip to the Bahamas to see the band of her dreams. Hello???? How much can one thirteen-year-old take???

“You know that thousands of girls like Aaron,” she said. “Right?”

“So it’s statistically almost impossible that a pop star boy will date a fan.”

I should have known she’d say something like that. I wanted to say, “Okay, just forget it.” But instead I said, “Whatever! I mean I just love his singing and his writing. That’s all.”


But that’s not all. How do you change what you feel just because some stupid statistics say you don’t have a chance? An article in Tigerbeat said Aaron had dated a girl from his high school for three months! And she wasn’t a star! So who knows what can happen? When you feel something, you have to believe! Your feelings are totally crucial to your life! When I look at Aaron’s face I get those stomach flutters! And feelings CANNOT BE IGNORED.

I started thinking about stomach flutters instead of the essay and wondering why they happen with just one particular boy. Why can one boy make your stomach go CRAZY????

I called my cousin Elyse to ask what she thought because she’s older and experienced.

“No one really knows,” she said. “That feeling just hits you. But you want to make sure that the boy you like, likes you back.”

“Well,” she said after thinking for a minute, “sometimes boys don’t want you to know they like you. So they look at you like they are trying to look like they aren’t looking at you or liking you, but really, they are.

Taro Meyer is a Grammy, Parents’ Choice, and Audie Award winning Audio Producer who has been producing and directing YA audiobooks for over 20 years, including The Princess Diaries Series starring Anne Hathaway, the All American Girl Series starring Ari Meyers, The Inheritance Cycle (Eragon, Eldest, Brisngr) and Judy Blume’s The Pain and the Great One, Here’s to You Rachel Robinson and Tiger Eyes among others.

She co-produced two touring companies of Trans-Siberian Orchestra's smash rock show Christmas Eve and Other Stories and their TV special The Ghosts of Christmas Eve, receiving Gold and Platinum Albums for her work with the team. She was associate producer of the award winning anti-bullying movie, “The Contest,” and co-produced the premier showcase of off-Broadway’s Little Willie.

As an actress and singer, she starred on Broadway in the musical Zorba, in numerous regional and off-Broadway shows, and on TV’s All My Children, Another World (for which she also composed music) and the mini-series Memories of Midnight, amongst others.


Taro will be awarding a $25 Amazon or B/N GC to a randomly drawn winner via rafflecopter during the tour.

a Rafflecopter giveaway
Posted by Rhianna at 9/14/2016

Thank you so much for hosting this tour and giveaway. I'm grateful for the opportunity to share Emma G.'s world. Her world was mine too: a love of writing and music and, of course, the excitement of that first crush. Emma G. was actually based on a real first crush story and I'd love to hear from readers because so many of us have those same feelings. Taro