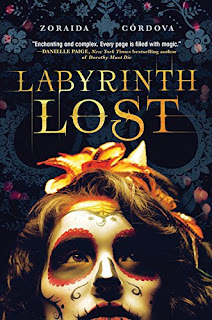 Labyrinth Lost (Brooklyn Brujas #1) by Zoraida Cordova
Notes: ARC received via Amazon Prime.
Young Adult, Supernatural, Witchcraft, LGBT
Print/Digital/Audio (336 pages, SOURCEBOOKS FIRE)
Nothing says Happy Birthday like summoning the spirits of your dead relatives.
Alex is a bruja, the most powerful witch in a generation...and she hates magic. At her Deathday celebration, Alex performs a spell to rid herself of her power. But it backfires. Her whole family vanishes into thin air, leaving her alone with Nova, a brujo boy she can't trust. A boy whose intentions are as dark as the strange marks on his skin.
The only way to get her family back is to travel with Nova to Los Lagos, a land in-between, as dark as Limbo and as strange as Wonderland...Author Site: website

After seeing Cordova speak on a diversity panel at this year's RT book convention, I knew I had to have this book. I am a big fan of fiction featuring mythology, witchcraft, and the paranormal but you so rarely see the Latino community represented in it. I believe Cordova plays a little bit fast and loose blending elements from different cultures in her world building but it was such a fresh change of pace I didn't find it problematic.

While I really didn't feel like romance was a big part of the plot, I was also very excited to see both a male and female love interest for Alex. Family played a big role in the story and Alex's is quite colorful and amusing. Two things held me back from being able to rate this higher, first being that Alex felt flat to me the second being that at times it felt like nothing was happening and no forward progress was being made. Occasionally the adventure just feels too slow and I found myself bored more than once. That said, it was still a read I'm glad I made time for and it ends in a way that already has me interested in the next installment.

If you're looking to add some diversity to your reading this is well worth picking up. I might not have loved it enough to rave over it but I do think it's a fresh read in an otherwise pretty stagnant genre that's not to be missed.
Posted by Rhianna at 9/13/2016