Blog Tour: THE WOMEN IN THE WALLS by Amy Lukavics [Giveaway]

Just in time for the season of fright, a new haunting tale from the author of Daughters Unto Devils. 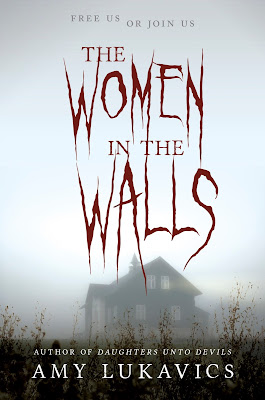 Lucy Acosta's mother died when she was three. Growing up in a Victorian mansion in the middle of the woods with her cold, distant father, she explored the dark hallways of the estate with her cousin, Margaret. They're inseparable—a family.

When her aunt Penelope, the only mother she's ever known, tragically disappears while walking in the woods surrounding their estate, Lucy finds herself devastated and alone. Margaret has been spending a lot of time in the attic. She claims she can hear her dead mother's voice whispering from the walls. Emotionally shut out by her father, Lucy watches helplessly as her cousin's sanity slowly unravels. But when she begins hearing voices herself, Lucy finds herself confronting an ancient and deadly legacy that has marked the women in her family for generations.

Ever since she was little, Amy was especially intrigued by horror books and movies. Raised in a small mountain town in Arizona, she sustained herself on a steady diet of Goosebumps, Fear Street, and Scary Stories to Tell in the Dark books before discovering Stephen King in her mother's bookshelf.

Amy lives with her husband, their two precious squidlings, and an old gentleman cat by the name of Frodo. When she isn't writing, she enjoys cooking, crafting, and playing games across many platforms.


3 winners will receive a finished copy of THE WOMEN IN THE WALLS, US Only.
a Rafflecopter giveaway
Posted by Rhianna at 9/22/2016

So excited for this book! I loved Daughters Unto Devils, so this is one of my most anticipated releases for the fall!