Jake Callahan, leader of the Tribe, has always believed he’s one of the good guys. Now, hunted by the government he used to work for, he’s taking a crash course in being bad. What he desperately needs is a bargaining tool, and that’s unfortunate for Christa Winters, daughter of Jake’s former boss.

Christa is a scientist, a total geek, and a good girl with a secret hankering for bad boys. Which turns out to be embarrassingly inconvenient when she’s kidnapped by a stunningly gorgeous—but obviously bad-to-the-bone—man intent on using her against the father she loves. A man with a seemingly uncanny ability to know exactly when she’s thinking about kissing him—which is most of the time.

But people are dying, and it becomes clear that the stakes are much higher than Jake ever imagined. Someone is out to obliterate the Tribe and everyone associated with it, including Christa. Only by working together to uncover the secrets behind the past, can they ever hope to have a future.


There was probably a perfectly reasonable explanation for why this man was here. He obviously knew who she was. Ergo, he probably did know her father. She’d simply call her dad up, and he’d tell her…what? She couldn’t begin to imagine.

Why couldn’t he have been a strip-o-gram? She’d liked that idea.

“No.” The curt word broke into her somewhat random thoughts.

“No, you may not phone your father.” He held out his hand. “Give me the phone.” 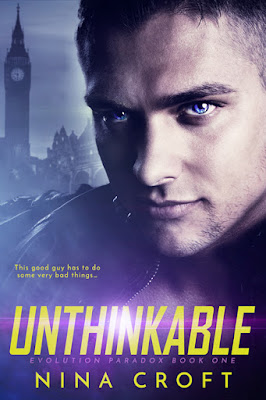 What the hell was going on? This wasn’t good. She only just resisted the urge to put her hand behind her back. Her eyes darted around the room, but she was still more confused than alarmed. She had an idea that wouldn’t last.

“The phone,” he said again.

“Why would I give you my phone, Mr. Callahan?”

“Because I’m asking you nicely.” He opened the leather jacket and revealed a shoulder holster complete with pistol. “That could change,” he murmured.

She stared at the spot long after the jacket was back in place and covering the pistol. Her mouth had fallen open. Now, she snapped it closed. She’d never in her life met anyone who wore a gun before. In fact, the only guns she had ever seen had been worn by policemen. Could he be a cop? Maybe it wasn’t a real gun. Maybe it was a prop. For his strip-o-gram act.

His face formed an incredulous expression. She had no clue why—she hadn’t moved. Not an inch, since she’d seen the gun. She wasn’t sure she could move; all her muscles were locked in place. Was this what it meant to be petrified—turned to stone? She really could not move. It was quite a fascinating phenomenon. She stared down at her feet, because it meant she didn’t have to look at him, or remember the gun, tried to wiggle one toe, finally managed it.

He cleared his throat, and she jumped.

What were you supposed to do in situations like these? Talk to them? Make them see you as a person. “Are you going to shoot me, Mr. Callahan?”

“Only if I have to.” He had a low and smooth voice, without even the hint of an accent.

“Look, I have no clue what you want, but I don’t have any money—I’m not worth going to all this trouble for.” She tried to make herself look small and harmless—not difficult when she was only five-foot-two. She even tried fluttering her lashes. Any moment now, he’d start his dance routine.

His eyes narrowed and a tic started in his cheek. “The phone.” His hand was still held out.

She was going to have to make a run for it. She edged back a little—if she lunged to the side, she might make it past him. He took a step closer, invading her personal space, so close she caught a whiff of his scent, masculine, spicy with a hint of sweat. It was a nice smell, reminded her of something…but she couldn’t remember what. Some old memory, one that made her feel sort of warm and fuzzy and—

“Jesus, would you fucking concentrate,” he growled, and she jumped again.

She bit her lip. “Sorry, but I get a little distracted when I’m nervous.”

“Christ, is this you nervous? I never would have guessed. Why don’t you do what I ask, and we can get the fuck out of here?”

It was getting awfully late for him to start the stripping thing.

“I am not a fucking strip-o-gram.”

Pick up your copy of UNTHINKABLE today:
Amazon | B&N

Growing up in the cold, wet, north of England, Nina Croft spent a lot of time dreaming of faraway sunnier places and ponies. When she discovered both, along with a whole load of other things, could be found between the covers of a book, her life changed forever.

Later, she headed south, picked up the perfect husband along the way, and together they volunteered to work in Africa. There they discovered a love of exotic places and a dislike of 9-5 work. Afterward they spent a number of years travelling (whenever possible) intermingled with working (whenever necessary.) Eventually they stumbled upon a remote area in the mountains of southern Spain and the small almond farm they now call home.

Nina spends her days reading, writing and riding her mare, Gencianna, under the blue Spanish skies—sunshine and ponies. She reckons this is proof that dreams really can come true if you want them enough.