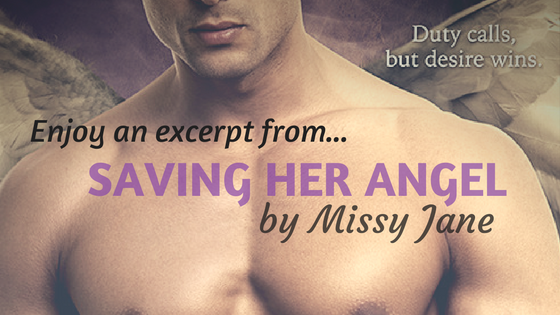 Eleanor has loved her boss Cam from afar for years, but now he wants to retire and send her away. Tearing her heart out would have been kinder.

Archangel Camael must never fall for a woman. If he does, he’ll lose his angelic powers, and he will age like a human. Protecting humans from evil is paramount and has meant periodically reinventing his identity to avoid rousing suspicion. But as his desire grows for his secretary, Eleanor, duty feels more like a burden, because he can’t imagine starting a new life without her.

He can never fall in love.

A force of evil is wreaking havoc and Cam and his Archangel brothers scramble to determine and thwart the cause. The key lies in Eleanor’s tormenting memories, but if they push her too hard, she might snap. Cam must walk the delicate line between protecting Eleanor, appeasing his brothers, and saving the world. 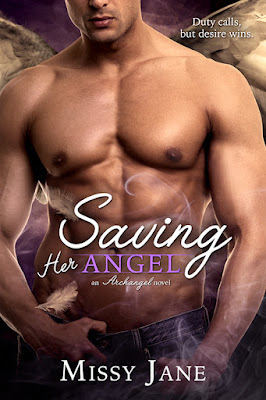 Closing down her thoughts, she tried to push him away but he wouldn’t budge.

Instead, he rested his hands on her hips. “Elle, calm down.”

His handsome grin nearly melted her on the spot. “Yeah. I like it. It’s short and sweet. Like you.”

She pushed at him again. “I’m not that short.”

With a stiffening of his shoulders, his amusement faded and he cupped one side of her face. “Hey, don’t be down on yourself. I’m being honest.”

“You barely notice me on a good day. If I’m so pretty and perfect and wonderful, why haven’t you mentioned it in the past four years?”

He closed his eyes and sighed then rested his forehead against hers. “I’m so sorry. I can’t believe it took me so long to even realize that was happening.” He straightened. “But now that I know, it shouldn’t  happen again. Especially now that my feelings for you have changed, grown into something…more.” He looked her over again and the heat in his eyes couldn’t be mistaken. “I really see you now, Elle. I see and I want to touch.”

Moving painfully slow, he cupped her face in both hands and brushed his lips against hers once, twice. Then he licked the seam of her lips and a sigh slipped from her mouth, granting him entrance as her eyes closed and her heart raced. They kissed.

It was no simple meeting of the mouths. It was ecstasy and every fantasy she’d ever had since meeting Cam. He sucked on her lips and slid his tongue into her mouth as she moaned into his. Strong hands squeezed her waist before moving up, beneath her shirt and onto bare skin. A shiver ran down her spine, and he pulled her against him. Hard chest to soft breasts had her shivering again.

He ran his lips down her jaw to her neck then suckled, and her nipples peaked in expectation.

“Damn you taste good,” he whispered.

The only response possible was a soul-deep sigh as he nibbled on her neck, moving from one side to the other in a lightly stinging caress. Trying to ground herself in the storm, she clutched his shoulders for dear life. The warmth beneath her palms had her moving them over his broad shoulders, down his strong arms, and over his back. His muscles clenched beneath her touch, empowering her and giving her the courage to continue touching him in a way she’d often dreamed. He cupped her breasts in both hands and she gasped.

“So beautiful. I can’t believe it’s taken me this long to notice.”

Pick up your copy of Saving Her Angel: Amazon | B&N | iBooks | Kobo

Missy Jane is the alter ego of a married mother of four who was born and raised in Texas. She spends most of her time lost in worlds of her own making, alternately loving and hating such creatures as vampires, shape-shifters, sexy Archangels, and gargoyles (to name a few). When not writing, she spends her time reading, taking photos of her beautiful daughters and training her husband to believe she's always right.