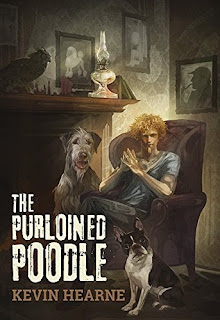 Oberon's Meaty Mysteries: The Purloined Poodle by Kevin Hearne
Notes: ARC received via NetGalley.
Urban Fantasy, Supernatural
Print/Digital/Audio (112 pages, SUBTERRANEAN)
Thanks to his relationship with the ancient Druid Atticus O'Sullivan, Oberon the Irish wolfhound knows trouble when he smells itand furthermore, he knows he can handle it. When he discovers that a prizewinning poodle has been abducted in Eugene, Oregon, he learns that it's part of a rash of hound abductions all over the Pacific Northwest. Since the police aren't too worried about dogs they assume have run away, Oberon knows it's up to him to track down those hounds and reunite them with their humans. For justice! And gravy! Engaging the services of his faithful Druid, Oberon must travel throughout Oregon and Washington to question a man with a huge salami, thwart the plans of diabolical squirrels, and avoid, at all costs, a fight with a great big bear. But if he's going to solve the case of the Purloined Poodle, Oberon will have to recruit the help of a Boston terrier named Starbuck, survive the vegetables in a hipster pot pie, and firmly refuse to be distracted by fire hydrants and rabbits hiding in the rose bushes. At the end of the day, will it be a sad bowl of dry kibble for the world's finest hound detective, or will everything be coming up sirloins? The Purloined Poodle is another exciting novella entry in Kevin Hearne's New York Times best-selling Iron Druid series.
Author Site: website

Waiting for new IDC novels is hard. Fortunately, author Kevin Hearne, is not only wonderful at engaging with his fans, he can write fantastic IDC short stories for fans to nibble on. I never read the blurbs for Hearne's books so I wasn't sure what to expect from The Purloined Poodle. What was delivered was even more awesome than I could have anticipated—Oberon dominates this kidnapping and murder mystery.

For a short story this felt pretty story rich and made me chuckle a lot. Oberon fans are sure to delight in his desire to be Sherlock Holmes. Short and lighter than most IDC stuff but a terrific diversion to entertain while one waits for the next novel I thoroughly loved it and recommend to all fans.