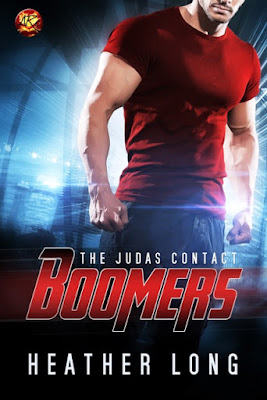 Mission: Research, analyze and troubleshoot the team’s active microchips
On the cutting edge of neuroscience, Ilsa is developing microchips that can be inserted into the brain and deliver information. The applications are endless, but her current goal is just to get dogs to return to their owners should they ‘become lost.’ When her college roommate turns up asking for lunch, she’s hardly prepared for the chaos that ensues or the revelation her chip changed the world and the lives of five heroes from the future. And now they need her help…

Abilities: toxins, poisons and assassination, he can kill with a touch

One of five desperate men sent back in time to save the future, Garrett volunteers to be the doctor’s guinea pig as she studies their neuro-chips. It’s not his first time being a lab rat. In close quarters, the unthinkable happens, an attraction that could kill Ilsa. Drawn together by science, and on the fast track to destiny, Ilsa must prove to Garrett he isn’t toxic to everything and save his team from their chips before they can end them…

Heroes come in all shapes and sizes. An alliance with Halo has given their leader a taste of hope. For these five lonely soldiers, the single emotion may prove their most dangerous threat.

National bestselling author, Heather Long, likes long walks in the park, science fiction, superheroes, Marines, and men who aren’t douche bags. Her books are filled with heroes and heroines tangled in romance as hot as Texas summertime. From paranormal historical westerns to contemporary military romance, Heather might switch genres, but one thing is true in all of her stories—her characters drive the books. When she’s not wrangling her menagerie of animals, she devotes her time to family and friends she considers family. She believes if you like your heroes so real you could lick the grit off their chest, and your heroines so likable, you’re sure you’ve been friends with women just like them, you’ll enjoy her worlds as much as she does.

a Rafflecopter giveaway
Posted by Rhianna at 8/02/2016