Today is the release day of When a Lioness Snarls by Eve Langlais! I’m excited to share this fantastic new paranormal romance with you. Make sure to check out the excerpt Eve is sharing with us and enter her giveaway!

About When a Lioness Snarls: 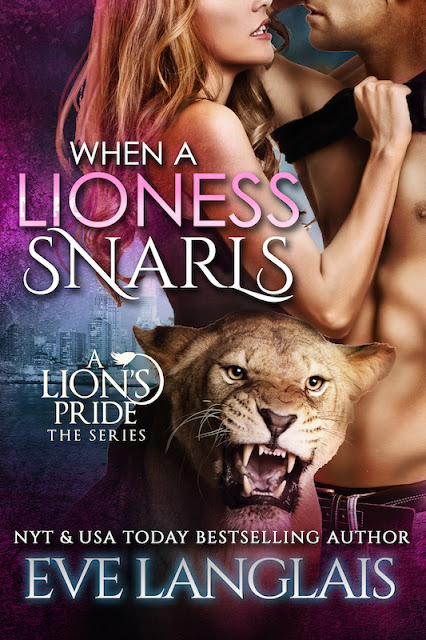 Stalking is only a crime among humans. In a lioness’s world, it’s called dating.

Jeoff, is a bit of a killjoy, a super cute one who gets furry on full moons.

But so does she.

Luna is everything Jeoff is not. Outrageous, outgoing, and violent. Very violent, and unafraid to go after what she wants—and she wants Jeoff.

Silly man, he thinks he can resist, but once a lioness sets her sights on a man, paws off! And if anyone thinks to try and take him… There’s a reason why the ladies of the pride win the yearly award for Baddest Biatches.

This is the life. Luna didn’t care what anybody said. Nothing could compare to the enjoyment of sunbathing in a warm patch of sunlight while the chill of fall gripped the city outside.
She stretched on the fabric-covered pile of cushions, extending all of her limbs, practically purring in delight as the rays of brilliant sunshine streamed through the large plate-glass window of the condo.
“What the fuck are you doing?” The shocked male voice didn’t startle her. Noisy wolf. She’d heard him coming for a while. He really needed to work on his stealth technique.
Exhibiting a laziness that usually only a male lion could achieve, Luna opened an eye and peered at the man standing, arms folded over his chest, across the room. He glared—how cute. “Hi, Jeoff.”
“Don’t you hi Jeoff me. What the hell are you doing in my apartment? Naked.”He’d noticed. Point. “I’m naked because it turns out you have a delightful afternoon spot, right about here.” She indulged in a long stretch atop the cushions that she’d yanked off his couch and upon which she lay with her arms and legs extended. The pose pulled her tanned skin taut. Tanned with no lines, she should add. She’d recently gotten some time on a beach for a job in the south. It was a shifter-friendly locale and clothing optional.
“You do realize that the folks in the building across from here can see straight in.”
How positively titillating. “Are they watching, do you think?” Luna rolled to her stomach and peered out the floor-to-ceiling glass window. She waved, but with the sun streaming in, couldn’t tell if anyone watched and waved back.
A heavy sigh let her know Jeoff still stood behind her. As if she could miss his presence. Jeoff wasn’t the kind of guy a girl could ignore. And not just because he reeked of dog. Dog as in a wolf shifter, not a true canine, although the two species did smell remarkably alike.
But she could forgive his furry fault because he was the standoffish hottie everyone wanted to bang. Like seriously, anyone with a pulse wanted to strip and ride Jeoff cowgirl style.
He had only himself to blame. Tall, much taller than her, Jeoff had broad shoulders but a lean build, an athletic build with defined muscle. He wasn’t like the lions in her pride, all beefed up and impressed with himself. While a touch nerdy with his glasses and three-piece suit—the glasses a bit of a superhero accessory to his public persona—Jeoff was all man. And an uptight prude.
“If your naked ass ends up on the Internet, don’t come yowling to me.”
“I’ve got nothing to be ashamed of,” she announced with a grin.
“Impossible,” he muttered. “Just impossible to reason with.”
“Don’t blame me because you can’t grasp the female mind.”
“The female mind is easy compared to that of a lioness. You’re all freaking nuts.”
“Why thank you.” Another sigh from him already? That might be a record, and another point.
“Why are you here?” Jeoff asked with an exasperation that had taken her under five minutes to achieve. The wolf proved such an easy mark to frazzle.
“I am here on pride business.” Luna flipped to her feet and padded toward Jeoff, leaving her sunny spot behind.
Don’t worry, my precious. I’ll be back. The winter months were about to begin. She’d need all the sunny spots she could find for napping.
“Does your business always involve breaking and entering?” Jeoff asked as he turned from her and headed to his kitchen.
“Not always, but more often than you’d think.”
He stuck his head around the fridge door to ask her, “Because the job demands it, or because a certain kitty got curious?”
“Jeoff, that is so species-ist. I should totally kick your ass for that.”
He straightened out of the fridge and handed her a beer. “Kick my ass later. Get some clothes on and then you can tell me what kind of business brings you here.”
“I don’t need clothes to talk.”
“Maybe you don’t, but I refuse to listen while your coochie is hanging out.”
Some people could be such prudes. “I’ll have you know my coochie does not hang because I do Kegels daily.” Luna did a squat just to see him avert his eyes to the ceiling.
But he wasn’t completely uninterested. The bulge in his pants was too pronounced for that.
Well, well. Maybe Jeoff isn’t as immune as I thought. And she really did wonder. She’d had her eye on the wolf for a while now, had even made a few overtures that he’d politely brushed aside. According to him, he dated only human girls because, “They cause less drama.”
Kind of boring really. But hey, his loss.
“Put some clothes on. Now.” Funny how a single guy in his early thirties could totally channel the voice and tone of a father.
Luna wasn’t a little girl, though. It didn’t take much to pounce him from behind and wrap naked limbs around him. She yelled, “A naked woman is touching you!” She totally couldn’t wait for him to freak out.
What she didn’t expect was to get flipped onto her back on the cushion-bereft couch with him poised atop her.
His eyes practically blazed. “Are you demented?”
She smiled. “Only when I take after my mother’s side.”
“And what did you inherit from your father’s side?”
“Ability to burp the alphabet in one shot.” 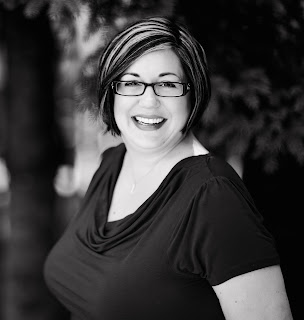 About Eve Langlais: ~ New York Times and USA Today Bestselling Author Hello, my name is Eve and I am a Canadian author who loves to write hot romance, usually with hot shifters, cyborgs or aliens. I should warn you that I possess a twisted imagination and a sarcastic sense of humor something I like to let loose in my writing. I love to write, and while I don't always know what my mind is going to come up with next, I can promise it will be fun, probably humorous and most of all romantic, because I love a happily ever after. Thanks so much for coming by and checking me out. If you'd like to know more, read some excerpts or find out what's coming next, then please visit me at http://www.EveLanglais.com Or sign up for my new release email list at http://www.evelanglais.com/newrelease Happy reading! Eve Langlais

Enter Eve’s Giveaway!
a Rafflecopter giveaway
Posted by Rhianna at 7/21/2016

What I think is I need to get this book!