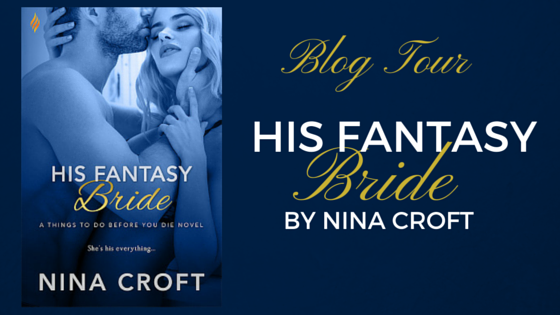 Dear readers, Confession time... I haven't read this series yet. I love Nina's paranormal and scifi books so shame on me! Not to mention that Nina is just the loveliest author to sit down and chat with. I was so lucky to get to work with her a bit this year and to meet her at RT in April. If you haven't read a Nina book yet and aren't sure where to start, leave a comment with what kind of reads you like and I can tell you which books I think are perfect for you. :D -- Rhi 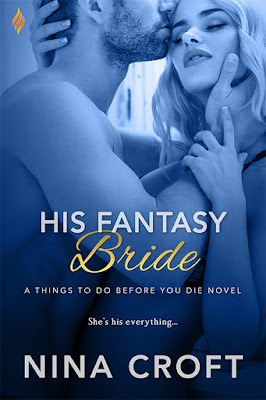 I can’t marry you. You don’t love me.

Two sentences, that’s all Gabrielle Harper left Vito D’Ascensio when she vanished the night before their wedding. If he wants his bride back, he’s going to have to hunt her down and prove his love. But when he searches for Gabrielle, he finds Gabby instead; it seems his perfect bride is nothing but a fantasy.

After six months, Gabby presumes it’s over, an episode in her life she’s totally ashamed of. But now Vito is back. He’s the one man she can never have, but as desire explodes between them, she has a tough time remembering why they shouldn’t be together. Oh, right, her family hates him, and he’s done terrible things. Or has he? But it doesn’t matter. When he finds out the truth about who she really is…he’ll never want to see her again.

Crap, bugger, fuck.
Gabby pushed herself upright then reached down and rubbed her ass with one hand.
Christ, the table was hard.
She hadn’t noticed it until now, her mind being occupied with the biggest orgasm she had ever had. Like ever. She glanced at Vito and had to bite back a smile. He was totally goddamn naked, and his cock was huge and hard and…
Not fair. I want that cock.
She heaved a huge sigh. “I didn’t bring any condoms.”
“You had a whole packet. I saw them yesterday.” His eyes narrowed. “What did you do with them?”
Hah—did he think she’d gone through a whole packet between then and now? She had made an impression. “I didn’t use them,” she muttered. “I took them out of my bag this morning.”
Why did I do that exactly? Oh yes…
At his look of disbelief, she shrugged and continued, “I…didn’t want to be tempted.”
He waved a hand at her almost naked figure hunched on his dining table. “Well, that worked out well.”
“What about room service?”
He cast her an incredulous glance. “I don’t think they have condoms on the menu.”
“Oh.”
He turned away, and the back view was just as good as the front. He had a beautiful tight ass, narrow hips and broad shoulders. His skin was smooth and olive and unblemished, and her mouth watered.
More not fair.
He ran a hand through his thick black hair. “Didn’t want to be tempted,” he mimicked not quite under his breath.
She frowned. No way was he putting all the blame on her. At least she’d had good intentions. Even if they hadn’t lasted past the offer of oral sex. So, she was weak willed.
She pushed herself off the table and wobbled over to where her bra lay on the floor. “You were the one who brought up blow jobs,” she muttered, grabbing it and slipping her arms in, reaching around to fasten the catch at the back. When she glanced up, his eyes were fixed on her breasts, a hot hungry expression on his face. His cock was still sticking up with an air of expectation, and a pulse started up between her thighs.
Not going to happen.
Sadly.
“Cover that goddamn thing up,” she said, waving a hand at his dick. She found her T-shirt slung over the back of a chair, pulled that on and down over her breasts. Now she was covered while he was still pacing the floor with nothing on at all, seemingly oblivious to the fact.
She crossed the room so she intercepted his route. “You’re still naked.”
He stopped abruptly. “Really? How observant of you.”
She sighed. “Look, I’m sorry about the condoms. But I really did come here to talk, and I thought…”
What had she thought? That with condoms at the ready she would have dived straight into bed with him and bugger the consequences?
Well, no one could say she didn’t know herself. Vito was clearly a weakness, one she now realized had been kept at bay by guilt. No way could she have had him while she was lying and in league with his enemies.
But once he’d come after her, things had changed.

Nina Croft grew up in the north of England. After training as an accountant, she spent four years working as a volunteer in Zambia, which left her with a love of the sun and a dislike of nine-to-five work. She then spent a number of years mixing travel (whenever possible) with work (whenever necessary) but has now settled down to a life of writing and picking almonds on a remote farm in the mountains of southern Spain.

Nina writes all types of romance, often mixed with elements of the paranormal and science fiction.
Posted by Rhianna at 7/11/2016