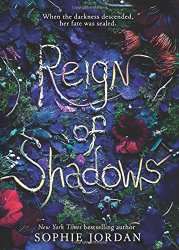 Reign of Shadows by Sophie Jordan
Notes: Review copy received via Amazon Vine.
Young Adult, Fantasy
Ebook/Print/Audio (304 pages, HARPERTEEN)
Destiny and darkness collide in this romantic, sweeping new fantasy series from New York Timesbestselling author Sophie Jordan.
Seventeen years ago, an eclipse cloaked the kingdom of Relhok in perpetual darkness. In the chaos, an evil chancellor murdered the king and queen and seized their throne. Luna, Relhok's lost princess, has been hiding in a tower ever since. Luna's survival depends on the world believing she is dead.
But that doesn't stop Luna from wanting more. When she meets Fowler, a mysterious archer braving the woods outside her tower, Luna is drawn to him despite the risk. When the tower is attacked, Luna and Fowler escape together. But this world of darkness is more treacherous than Luna ever realized.
With every threat stacked against them, Luna and Fowler find solace in each other. But with secrets still unspoken between them, falling in love might be their most dangerous journey yet.Author Site: website

Sadly, I had huge issues with this one. (2 stars)


I hate giving a book that ending on such a delightful cliffhanger such a low rating but this book was one of the most challenging reads I've forced myself through in ages.

When it comes to any fantasy, scifi, paranormal, or dystopian read it is imperative that the world building hold up under scrutiny. Unfortunately, Jordan's world is really poorly put together. How the heck are people making bread when there's no sun to grow grain? Not to mention everyone would die from lack of Vitamin D. I could have rolled with it if she'd bothered to explain some kind of logic to how people were surviving with the myriad if basic problems people would have in a world without sun. Not to mention that without it the temps would be subzero.

Those issues aside I found myself bored to death through most of it. Nothing happens. They travel on foot. It's dark. They don't talk. The climb trees. There are monsters but these two are so good at fighting them there really isn't much real danger until they face humans. The only real redemption was that there were a couple of nice attention grabbers in the last few chapters. A good "surprise" toward the end—though  I had seen it coming from the very beginning so it probably won't surprise a lot of other readers either and a huge cliffhanger ending.

If you hate cliffhangers and really pick apart world building I recommend skipping this one. If you don't mind dragging pace and prefer to focus on the character relationships over the fantasy elements you might enjoy it.
Posted by Rhianna at 3/06/2016