Today is the release day of Zoe Forward's Playing the Witches Game! I love working with Zoe and I think you guys will love this fun romance. 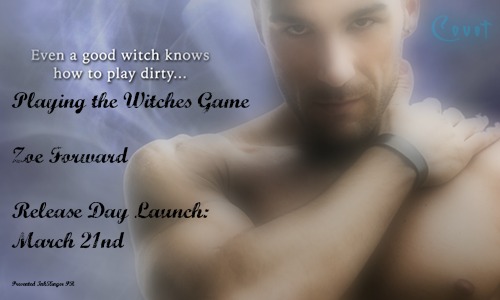 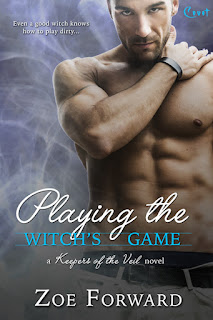 Pleiades witch Jennifer Marcos is certain that the host of Extreme Survivor is her soulmate. All she has to do is find a fake boyfriend, get on the show, and voila! She'll have her destiny. Unfortunately, she has to rely on ex-Russian spy Nikolai Jovec's six-foot-something of gorgeous, infuriating hotness. To make matters worse, the electric attraction between Jen and Nikolai is hotter than ever. But the only way Nikolai can protect Jen is by hiding the identity of her true Destined...him.

Even a good witch knows how to play dirty...


“Since you no longer work for Russia I want to offer you a job.”

“What kind of job?” His gaze swung to her, the wariness back in his eyes.

“To protect you from whatever might come after you? I’m not a bodyguard.” He folded his arms over his chest. “You obviously need a better bodyguard, if tonight is any indication of his skill.”

“There’s nothing wrong with my bodyguard. I didn’t invite him along tonight. I have a different job for you.”

She cleared her throat and then forced out quickly, “I would like to hire you to be my fake boyfriend on TV.” 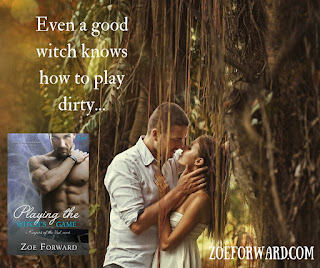 About the author: Zoe Forward is a hopeless romantic who can’t decide between paranormal and contemporary romance. So, she writes both. In addition to being a mom to one rambunctious kindergartener and wife to a conservation ecologist who plans to save all the big cats on the planet, she’s a small animal veterinarian caring for all the small furries, although there is the occasional hermit crab.   When she’s not typing at her laptop she’s tying on a karate belt for her son or cleaning up the newest pet mess from the menagerie that occupies her house. She’s madly in love with her globe trotting husband of ten years and happiest when he returns to their home base in North Carolina.

Enter Zoe’s Giveaway:
a Rafflecopter giveaway
Posted by Rhianna at 3/21/2016