I think I'm paraphrasing here but yesterday I saw a tweet in which someone said that we don't mourn artists because we knew them but because they helped us know ourselves. It was such a profound thing and very much put into words something I feel each time an actor or other celebrity that I felt a connection of some sort with. I think we're all in mourning this week over the passing of two marvelously different talents that we've felt a connection to.

Strangely enough it was a week ago that my husband was driving me to therapy and the radio was on and it came up that it was David Bowie's birthday and I saw remarking how much I had been wanting to find time to sit down and watch Labyrinth again. It was one of my favorite films from my childhood and while I certainly connected with Sarah, it was always the enigmatic Goblin King whom I admired. Unlike most of my peers I didn't want to be with him, I wanted to BE him. He was otherworldly and a little frightening, majestic and beautiful. I wanted to be those things too. Of course, I love this music and his brilliance as a chameleonic pop star. He was amazing as Nikola Tesla in The Prestige. *sigh* I am much saddened that he has left this world but also heartened that he left it far better for his having been part of it. 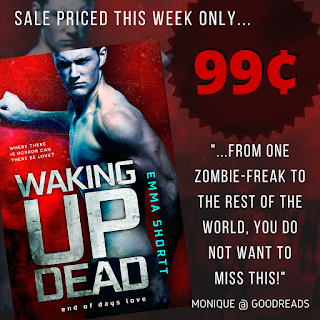 But enough melancholy, let's talk about what we're reading!

What luscious tome is holding you captive this weekend? The reading I'm nibbling on is an upcoming Samanthe Beck title that I can't link to or share a cover for as it isn't up for preorder until next week. No spoilers for you my lovelies. So far it's quite a fun first taste of Sam's work—I know, I know, how did I not read her before now, I suck—if you love Brazen books I think you guys will LOVE it. It's funny and sexy and the set-up is really clever.

Speaking of clever! If you haven't grabbed a copy of Waking Up Dead by Emma Shortt yet... DO IT! Long before I started working for the publisher I was a fan of this series. It's very The Walking Dead-like but with more romance and the companion novel releases on Monday. It will totally tide you over if you've been having Daryl and Rick withdrawals.

In not-for-work reads I'm trying to listen to A Prelude to War by Kevin Hearne from the story collection Three Slices so I can then read Staked. The hubs, however, hates the way Luke Daniels narrates Oberon's dialog so he can't stand it when I listen in the same room... and since I listen while I fold laundry on our bed... yeah, you can see where this is going. Darnit.

Also in the Three Slices collection is a story from Delilah S. Dawson whom I have a bit of a crush on, she's just too cool, and the books she writes are phenomenal. I'm keeping her book, written as Lila Bowen, in my purse so I can read when I wind up somewhere I don't want to be. It's so delicious I have to savor it in small pieces. If you haven't read anything of hers yet you are doing yourself a disservice, you simply must pick one and be delighted. Have I ever steered you wrong?

May your weekend bring you the three R's: rest, relaxation and lots of reading time! -- Rhi
Posted by Rhianna at 1/15/2016