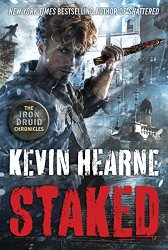 Staked (The Iron Druid Chronicles #8) by Kevin Hearne
Notes: ARC received via Amazon Vine.
Urban Fantasy, Mythology, Werewolves, Vampires
Digital/Print/Audio (336 pages, RANDOM HOUSE)
When a Druid has lived for two thousand years like Atticus, he’s bound to run afoul of a few vampires. Make that legions of them. Even his former friend and legal counsel turned out to be a bloodsucking backstabber. Now the toothy troublemakers—led by power-mad pain-in-the-neck Theophilus—have become a huge problem requiring a solution. It’s time to make a stand.
As always, Atticus wouldn’t mind a little backup. But his allies have problems of their own. Ornery archdruid Owen Kennedy is having a wee bit of troll trouble: Turns out when you stiff a troll, it’s not water under the bridge. Meanwhile, Granuaile is desperate to free herself of the Norse god Loki’s mark and elude his powers of divination—a quest that will bring her face-to-face with several Slavic nightmares.
As Atticus globetrots to stop his nemesis Theophilus, the journey leads to Rome. What better place to end an immortal than the Eternal City? But poetic justice won’t come without a price: In order to defeat Theophilus, Atticus may have to lose an old friend.Author Site: website

Wait, whut? This is only 300-some pages long? Well it sure as heck felt like 800. In a good way! There's a lot of storyline packed into Staked between our three protagonists and the stakes (no pun intended) get quite high.

I've been quietly watching Hearne's career from before Hounded released and it's been really great to see his writing get stronger with each book. I probably recommend this series offline more than any other for sheer broad appeal but something about Staked just felt stronger, more tightly written. Like he's really hitting his stride as a story teller. I finally feel like I'm connecting with Granuaile as a character too which I think had a lot to do with her plot this time around. Owen continues to amuse but his characterization felt richer, more reachable and mature in a way that made me feel sappy. On the same hand I don't think I'll be the only reader who finds themselves feeling torn when certain happenings happen and make things complicated for former student and teacher. Prepare for complicated feels y'all.

Look, if you've loved the series so far and you want to skip a night of sleep you're gonna love this. It's never slow, there's a ton of story, loads of butt kickery, and plenty of good humor thrown in. I think it's Hearne at his finest and I can hardly stand the thought that we're going to be waiting months for book 9. Put on the coffee readers, you're going to be napping at your desk tomorrow.
Posted by Rhianna at 1/22/2016