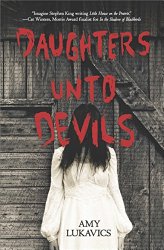 Daughters unto Devils by Amy Lukavics
Notes: Review copy received via Amazon Vine program.
Young Adult, Horror, Historical
Ebook/Print/Audio (240 pages, HARLEQUIN TEEN)
When sixteen-year-old Amanda Verner's family decides to move from their small mountain cabin to the vast prairie, she hopes it is her chance for a fresh start. She can leave behind the memory of the past winter; of her sickly ma giving birth to a baby sister who cries endlessly; of the terrifying visions she saw as her sanity began to slip, the victim of cabin fever; and most of all, the memories of the boy she has been secretly meeting with as a distraction from her pain. The boy whose baby she now carries.
When the Verners arrive at their new home, a large cabin abandoned by its previous owners, they discover the inside covered in blood. And as the days pass, it is obvious to Amanda that something isn't right on the prairie. She's heard stories of lands being tainted by evil, of men losing their minds and killing their families, and there is something strange about the doctor and his son who live in the woods on the edge of the prairie. But with the guilt and shame of her sins weighing on her, Amanda can't be sure if the true evil lies in the land, or deep within her soul.Author Site: website

I'm always on the lookout for something weird and moody that will make my skin crawl. But I'm not big on gore for the sake of gore so sometimes it's hard to find a great YA novel that meets that need. A great one I've read in the past year was Delilah S. Dawson's Servants of the Storm. Though very different from SotS, Daughters Unto Devils falls into that same creepy, moody category and I found it very enjoyable.

I rarely sit down and read a book in one sitting but I did with this one. It's very engrossing and intense, there's always something looming, something foreboding threatening to consume Amanda and her family. It does unfortunately stray into the gory territory a time or two and the pacing can be yawn-inducing at times but overall I found it just the sort of read I was in the mood for.

I will note that I felt it was quite firmly upper YA. I tend to not comment on sex in YA because I don't think it's a big deal but between the sexual content and the violence, I felt like this one was just mature enough it might be too frightening and explicit for younger YA readers. I know it would have given me nightmares at 12-13. While I think kids should read what they want I also think many parents want to know if there's a situation like this so take it as what you will.

Richly morbid, delightfully dark and with a really terrifying ending that will leave you breathless this is one spooky read I will heartily recommend.