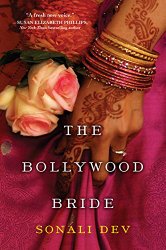 The Bollywood Bride by Sonali Dev
Notes: Complimentary ARC received via Amazon Vine in exchange for an honest review.
Contemporary Romance, Multicultural
Ebook/Print/Audio (352 pages, KENSINGTON)
Ria Parkar is Bollywood's favorite Ice Princess--beautiful, poised, and scandal-proof--until one impulsive act threatens to expose her destructive past. Traveling home to Chicago for her cousin's wedding offers a chance to diffuse the coming media storm and find solace in family, food, and outsized celebrations that are like one of her vibrant movies come to life. But it also means confronting Vikram Jathar.
Ria and Vikram spent childhood summers together, a world away from Ria's exclusive boarding school in Mumbai. Their friendship grew seamlessly into love--until Ria made a shattering decision. As far as Vikram is concerned, Ria sold her soul for stardom and it's taken him years to rebuild his life. But beneath his pent-up anger, their bond remains unchanged. And now, among those who know her best, Ria may find the courage to face the secrets she's been guarding for everyone else's benefit--and a chance to stop acting and start living.
Rich with details of modern Indian-American life, here is a warm, sexy, and witty story of love, family, and the difficult choices that arise in the name of both.Author Site: website

What a different story. It's been a while since I was treated to a romance that had a solid dose of Bollywood spice and that's what I wound up enjoying most about THE BOLLYWOOD BRIDE. Ria is one of those onion characters, you just keep peeling layers and seeing more of whom she is. But I honestly never warmed to Vikram and their romance never felt like it was the central plot.
While there's a touch of gothic romance underscoring part of Ria's past in good ways I found myself feeling as if Dev was trying to cram too many ideas into this book. Having not read her first book I'm not sure if this is just her style or an issue with this one only.
If you're in the mood for something romantic that has a lot going for it beyond the happily ever after check this one out.
Posted by Rhianna at 10/01/2015