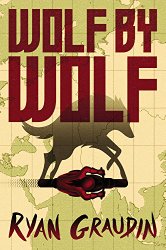 Wolf by Wolf by Ryan Graudin
Note: ARC received for free via NetGalley in exchange for an honest review.
Release Date: October 20, 2015
Young Adult, Alternate History
Print/Ebook (400 pages, LITTLE BROWN)
The year is 1956, and the Axis powers of the Third Reich and Imperial Japan rule the world. To commemorate their Great Victory over Britain and Russia, Hitler and Emperor Hirohito host the Axis Tour: an annual motorcycle race across their conjoined continents. The victor is awarded an audience with the highly reclusive Adolf Hitler at the Victor's ball.
Yael, who escaped from a death camp, has one goal: Win the race and kill Hitler. A survivor of painful human experimentation, Yael has the power to skinshift and must complete her mission by impersonating last year's only female victor, Adele Wolfe. This deception becomes more difficult when Felix, Adele twin's brother, and Luka, her former love interest, enter the race and watch Yael's every move. But as Yael begins to get closer to the other competitors, can she bring herself to be as ruthless as she needs to be to avoid discovery and complete her mission?
Author Site: website

Quite engrossing. (4 stars)
If you love alternate history WOLF BY WOLF is an engrossing swap as a young Jewish girl attempts to kill Hitler. But it's also so much more. I don't want to say that there's a strong focus on relationships yet that's really an important piece of what makes this such a good book. Yael's relationships with the people she has lost and those she is competing against play significant roles in who she is and what she is trying to do.

While I felt that at times it was slow or that it cut off where more information would have been useful WBW was a really good read and one I think most of the target audience will find enjoyable. I'm looking forward to thrusting it on my own teenager to read.