Review: The Heir by Keira Cass 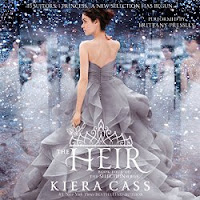 The Heir (The Selection #4) by Keira Cass
Young Adult, Romance, Dystopian
Ebook/Print/Audio (368 pages, HARPERTEEN)
Twenty years ago, America Singer entered the Selection and won Prince Maxon's heart. Now the time has come for Princess Eadlyn to hold a Selection of her own. Eadlyn doesn't expect her Selection to be anything like her parents' fairy-tale love story...but as the competition begins, she may discover that finding her own happily ever after isn't as impossible as she's always thought.Author Site: website

Loved it for the biggest reason others hated it. (5 stars)

I very much enjoyed The Selection trilogy but I was kind of stumped as to why there would be a follow-up about America and Maxon having a kid. But once there was a blurb and cover for THE HEIR it began to make some sense and it became a read I was quite anxious to devour. When I read reviews for it I was quite surprised that so many readers didn't experience it the same way I had. So let me just say that this is a very polarizing story but I think if you read a lot of the negative reviews beforehand you will be prepared for why and be able to see it with a unique perspective.

Eadlyn is probably the most unlikable protagonist in recent YA. She's just awful. She doesn't mean to be but she is the very epitome of privilege and being unintentionally spoiled by knowing who she is within the hierarchy of her nation. She's very self-involved and I think many readers will find it extremely off-putting. I did too, at first. But what made it work for me was knowing that THE HEIR is the beginning of Eadlyn's story. She had to start somewhere and every unlikable thing about her makes sense according to how her life has unfolded as the next ruler. Eadlyn knows no other life or way to be until she agrees to do a Selection and begins meeting her suitors. There is a slow and subtle progression through this book that some readers may not notice but I felt that by the last page Eadlyn was beginning to see herself and the world differently. I'd dare say she was ready to change and I think her trilogy (is this going to be one?) will be really great as she grows as a person. As a reader I found Eadlyn a refreshing change from the usual likable and nice heroines.

It was really lovely to experience America and Maxon and other characters I already knew in a new way. The suitors are a great mix and some are horrible and some are wonderful. I have a favorite and I think it might be who Eadlyn winds up with but even then there are a couple of others I wouldn't mind her being with too. The way the book ended left me anxious and dying to know when the next book comes out.

Since I listened to the book on audio I want to add that I think it was a great listen too. Brittany Pressley was a fantastic narrator. Whether you read it in print or ebook or listen to it as I did, I think you will enjoy THE HEIR as long as you think of it as only one piece of a whole. I very much believe Eadlyn is going to grow on readers who give her books a serious chance.