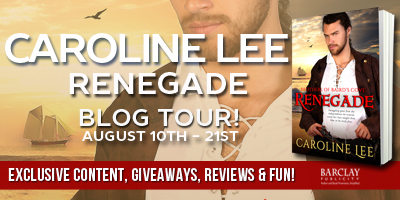 I do all my best plotting on the bow of a boat.

There’s just something so freeing and thought-stimulating about watching the water fall away in front of you, and I’ve found that the rhythm of it really helps my brain skip around and make connections about the direction I want my current plot to go. Sometimes I’m just plotting scenes (dialogue comes naturally, for some reason, where you’re zipping along over the water), or sometimes I’m plotting an entire series. But no matter what I’m working on, I do it best when I’m staring at the waves and the distant shoreline or salt marsh on the other side of my gaily-painted toesies (I favor whites and bright pinks for summertime).

Most of Renegade was thought-out on the bow of a boat, so it shouldn’t be a surprise that the theme of nautical freedom is woven throughout it. I love the water as much as I love the land of my native Lowcountry, and I wanted my characters to love it too.

My heroine, Becks, is deeply connected to her Sea Island home, and that includes the rivers and creeks. The book starts with her knee-deep in the spring river, her toes curled in the mud, crabbing by hand.  Their first kiss takes place on that same river, during a deliciously sensual rainstorm, on a fishing trip. Being on the water is just part of Becks’ everyday life, and how she exerts her independence.

But it’s the hero of Renegade, McKee, who got my love of boating. Mac has trouble with authority, and values his freedom more than anything else. He left home at seventeen to sign onto a steamship, and has been all around the world. Once he gained enough money, he bought his own schooner, and now shuttles rum (and a few other more illicit goods) from the Caribbean. He lives his life on his own schedule, and owning his own ship allows that.

Mac’s need for independence is what feeds his love of sailing, and he’s built his life—and his identity—around that need. But Becks is deeply rooted in Edisto Island, and Mac is going to have to choose between the freedom of his past and the opportunities of a future there on the island. It’ll take a woman like Becks—a woman who values her independence as much as he values his—to prove to him that he can give up smuggling without giving up his freedom. But can she prove that there’s a special kind of freedom that comes from loving a place enough to tie yourself to it?

Renegade takes place twelve years after the end of the Civil War, and one of the central themes is the value of freedom, and the different kinds of freedoms we find in our lives. So it shouldn’t be any surprise that most of it came to me while I was hurtling along the rivers and creeks of Edisto Island, on the bow of a boat. Because there’s no other freedom in the world quite like that one.

Smuggling gave him the revenge he needed... 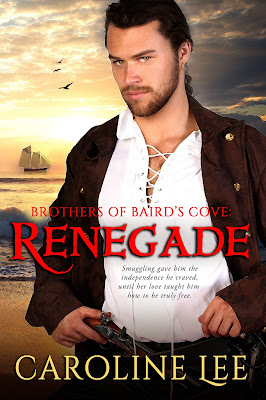 To no one's surprise, McKee Baird never fought in the War Between the States. His fiercely independent nature made it impossible for him to take orders, and his close friendship with a black man stopped him from fighting for his father's South. But he's found his own way to rebel against the new government the United States has imposed on him... and right now, the only thing standing in the way of his smuggling business is the intriguingly uninhibited Becks Middleton.

Their chance meeting gave her the excitement she'd been craving...

Becks has a life of freedom away from Charleston society's rules. So of course she can't help but be drawn to the stimulating renegade her mother invites to visit Beckett Plantation, even if she doesn't approve of his profession. When the opportunity to seduce Mac arises, Becks takes that chance, planning on one night of passion before the dangerous smuggler leaves. But when she accidentally becomes part of his schemes, she can't reveal the truth without risking his freedom. Joining him on his ship, Becks will face not just her growing love for Mac but a confrontation with authorities that will threaten their very lives.

Can the two of them reconcile their differences before their future is stolen away?


Find out more at: Amazon

Caroline Lee is what George R.R. Martin once described as a "gardener author"; she delights in creating interesting and lovable characters, and allowing them to lead their own stories. Often they draw the story along to completely unexpected--and wonderful!--places. She considers a story a success if she can re-read it and sigh dreamily... and she wishes the same for you.

A love of historical romance prompted Caroline to pursue her degrees in social history; her Master's Degree is in Comparative World History, which is the study of themes across history (for instance, 'domestication of animals throughout the world,' or 'childhood through history'). Her theme? You guessed it: Marriage throughout world history. Her favorite focus was periods of history that brought two disparate peoples together to marry, like marriage in the Levant during the Kingdom of Jerusalem, or marriage between convicts in colonial New South Wales. She hopes that she's able to bring this love of history-- and this history of love--to her novels.

Caroline is living her own little Happily Ever After with her husband and sons in North Carolina.

a Rafflecopter giveaway
Posted by Rhianna at 8/14/2015