Some secrets carry the weight of the world.

Rose McKenzie may be far from Earth with no way back, but she's made a powerful ally--a fellow prisoner with whom she's formed a strong bond. Sazo's an artificial intelligence. He's saved her from captivity and torture, but he's also put her in the middle of a conflict, leaving Rose with her loyalties divided.

Captain Dav Jallan doesn't know why he and his crew have stumbled across an almost legendary Class 5 battleship, but he's not going to complain. The only problem is, all its crew are dead, all except for one strange, new alien being.

She calls herself Rose. She seems small and harmless, but less and less about her story is adding up, and Dav has a bad feeling his crew, and maybe even the four planets, are in jeopardy. The Class 5's owners, the Tecran, look set to start a war to get it back and Dav suspects Rose isn't the only alien being who survived what happened on the Class 5. And whatever else is out there is playing its own games.

In this race for the truth, he's going to have to go against his leaders and trust the dark horse. 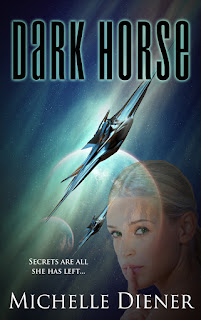 Rose slipped her ticket out of hell over her head and tucked it beneath her shirt, where it lay against her skin, throbbing like a heartbeat.

The sensation was so unnerving, she curled her fingers around it and lifted it back out, eyeing the clear crystal oblong uncertainly.

“Iʼll try to keep all the passageways clear for you and Iʼve disabled the lenses, but just in case someone disobeys orders, it would be better if they didnʼt see me.” Sazo spoke too loudly through the tiny earpiece she wore, and she winced.

She reluctantly tucked the crystal, that was somehow also Sazo, back under her shirt, tugging the cord it hung from so it was below her neckline. After three months of being the only thing sheʼd had to wear, washed over and over again, the shirt was threadbare, and barely concealed Sazo anyway, but it was better than nothing.

She took the two steps to the door of the tiny control room tucked away to one side on the Tecran ship and it slid silently open. Sheʼd only been inside for ten minutes at most to steal Sazo, or break him out, depending on your view of things, and the corridor was as empty now as it had been when Sazo led her here.

She looked back, but the door had closed, completely concealing the control room, so it looked like an uninterrupted passageway again.

“Youʼre still in control, even though Iʼve unplugged you?” She spoke very quietly, because even though Sazo had opened doors, and diverted traffic all the way from her prison cell to this room earlier, there was no point taking foolish chances like talking too loudly when it was unnecessary.

“I would not have initiated this plan if I wasnʼt absolutely certain that it would work.” Sazo sounded a little . . . stressed.

“There has been a delay loading the animals at the launch bay and the Grih have come through their light jump three minutes sooner than I calculated.” He went quiet for a moment. “Iʼm sorry, Rose.”

“What? What is it?” Freezing hands of panic gripped her heart and she stumbled to a halt. If he was going to tell her they had to abort, that she had to go back to the cell . . .

“The lion has been killed.” 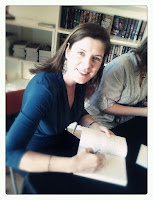 Michelle Diener writes historical fiction, fantasy and science fiction. Having worked in publishing and IT, she’s now very happy crafting new worlds and interesting characters and wondering which part of the world she can travel to next.

Michelle was born in London, grew up in South Africa and currently lives in Australia with her husband and two children.

When she’s not writing, or driving her kids from activity to activity, you can find her blogging at Magical Musings, or online at Twitter, at Google+ and Facebook.

Michelle will award one randomly drawn winner via Rafflecopter a $25 Amazon/BN gift card.

Thanks for having me on RhiReading, Rhianna.