Review: The Undying Legion by Clay Griffith and Susan Griffith 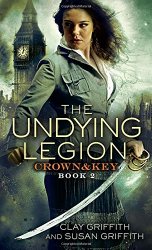 The Undying Legion (Crown & Key #2) by Clay Griffith and Susan Griffith
Fantasy, Steampunk, Alternate History, Mythology, Mystery
Ebook/Print/Audio (336 pages, DEL REY)
With a flood of dark magic about to engulf Victorian London, can a handful of heroes vanquish a legion of the undead?
When monster-hunter Malcolm MacFarlane comes across the gruesome aftermath of a ritual murder in a London church, he enlists the help of magician-scribe Simon Archer and alchemist extraordinaire Kate Anstruther. Studying the macabre scene, they struggle to understand obscure clues in the ancient Egyptian hieroglyphics carved into the victim’s heart—as well as bizarre mystical allusions to the romantic poetry of William Blake. One thing is clear: Some very potent black magic is at work.
But this human sacrifice is only the first in a series of ritualized slayings. Desperate to save lives while there is still time, Simon, Kate, and Malcolm—along with gadget geek Penny Carter and Charlotte, an adolescent werewolf—track down a necromancer who is reanimating the deceased. As the team battles an unrelenting army of undead, a powerful Egyptian mummy, and serpentine demons, the necromancer proves an elusive quarry. And when the true purpose of the ritual is revealed, the gifted allies must confront a destructive force that is positively apocalyptic.

I'm still not sure if I like this series or not. I know that's a terrible way to open up the review but as much as I'm enjoying the characters I feel strangely detached from their adventures. I think something that might have made my enjoyment stronger was if I knew much about the poetry mentioned in the blurb or the churches of London. Even the undead fights felt a bit dry.

I did find that while this plot had really draggy parts this time around, I felt like the characters had more going on. Especially Malcolm, whom I have really grown to like more and more. In fact, I felt like Simon and Kate took a bit of a backseat to him this time. The scenes featuring Imogen and Charlotte were my favorites.

The mystery this time felt a bit anticlimatic and it ended on a small cliffhanger that makes me quite glad the next book is coming out so close to it.

I love that cover. I don't know if this is for me or not, but it looks interesting enough to try. I do like that the characters are good, that is very important to me. I know that if I don't like the characters, I won't like the book. Maybe, I'll give book one a shot. Thanks.

Your opening totally made me snort. I've got book one up for book club in October. Little nervous about it.