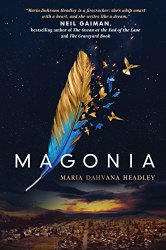 Magonia by Maria Dahvana Headley
Young Adult, Fantasy
Ebook/Print/Audio (320 pages, HARPERCOLLINS)
Aza Ray Boyle is drowning in thin air. Since she was a baby, Aza has suffered from a mysterious lung disease that makes it ever harder for her to breathe, to speak—to live. So when Aza catches a glimpse of a ship in the sky, her family chalks it up to a cruel side effect of her medication. But Aza doesn't think this is a hallucination. She can hear someone on the ship calling her name.
Only her best friend, Jason, listens. Jason, who's always been there. Jason, for whom she might have more-than-friendly feelings. But before Aza can consider that thrilling idea, something goes terribly wrong. Aza is lost to our world—and found, by another. Magonia.
Above the clouds, in a land of trading ships, Aza is not the weak and dying thing she was. In Magonia, she can breathe for the first time. Better, she has immense power—but as she navigates her new life, she discovers that war between Magonia and Earth is coming. In Aza's hands lies fate of the whole of humanity—including the boy who loves her. Where do her loyalties lie?
Author Site: website

What a weird and enjoyable diversion from the usual! (5 stars)

I love strange books. I love strange characters, worlds, writing styles. I should have known by the Gaiman quote on the cover this was going to be fantastic and odd in all the best ways. That said, it took me several chapters to warm up to the story even though I was loving Headley's voice. It's a tricky thing to make a world within a world work and as an adult reader of YA I sometimes struggle with letting myself believe it. Once I warmed to the idea the pages seemed to fly by and I found MAGONIA difficult to set down.

I feel like anything I could review in regards to the plot would spoil discoveries I think readers should get to uncover on their own but I will say that if you like alternate histories or parallel universes this has similar elements. Though I was left with some unanswered questions and threads left unraveled I thoroughly enjoyed MAGONIA and have put Headley on my list of authors to watch.

Romance, airships, strange biology, outcasts... this book has it all. If you enjoy the work of Neil Gaiman or Diana Wynne Jones do not miss out on this one.