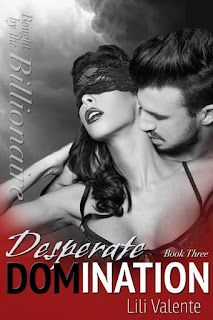 Desperate Domination (Bought by the Billionaire #3) by Lili Valente
Serial, Erotica, Romance
Ebook (129 pages, SELFPUBLISHED)
"You're mine. You belong to me. You will always belong to me. Because no one has ever made you feel the way I have."
Jackson Hawke might be a monster, but he's Hannah's monster. They belong together and she's determined to show Jackson she can love every part of him-light and dark, cruel and gentle, lost soul and Dominant man.
Jackson knows he doesn't deserve her. He is broken and twisted and wrong inside, but when Hannah touches him it feels right, he feels right in a way he hasn't in so long.
Can a monster learn to become a man again? Or will dark forces from the past claim Hannah's life before she can claim his heart?
* * Desperate Domination is the 3rd in the Bought by the Billionaire romance series and ends in a CLIFFHANGER. For maximum enjoyment it should be read after books one and two.* *


Like dark and dirty reads? Here's #3 of 4 installments you MUST READ! (4 stars)

Phew! I had heard that Jackson was going to get crazy darker before he was going to change and dang is that spot on. If you haven't read the previous installments please do not read this review! I can't promise it won't spoil previous events.

After the big cliff hanger ending of DEEP DOMINATION I expected things would start moving in a more positive direction between Hannah and Jackson. Boy was I wrong! If you thought things were dark before you are in for the worst kind of shock. Jackson is one hero I would never want on my bad side. He's capable of some pretty heinous behavior that I'd honestly never come back from but this is fiction and it works to show how messed up he is by what he has been through and how desperately both he and Hannah need someone to love them. It was pretty much the only thing I didn't like about this book, I hate it when heroes do something truly awful to the heroine and it is quickly glossed over. When he realizes what a terrible act it was it was really great to finally see the potential he had to be a good guy.

This is one of the most out-there plots overall but if you're in the mood for something kind of over-the-top dark, nail-nibblingly suspenseful, that's full of good old-fashioned hardcore smutty goodness you need to get going on the Bought by the Billionaire serial. Is it even remotely grounded in plausibility? Not really and that's exactly what makes it a dirty good fun read.