Review: Anya and the Shy Guy by Suze Winegardner 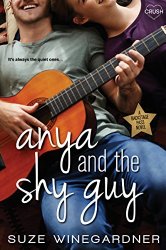 Anya and the Shy Guy (Backstage Pass #4) by Suze Winegardner
Young Adult, Romance
Ebook/Print (183 pages, ENTANGLED CRUSH)
It's always the quiet ones...
Anya Anderson doesn't just need a big break, she needs any break. Living on the streets doesn't leave a girl many options, so when she scores a gig reporting on the Seconds to Juliet tour, she jumps at the chance to earn enough money to sleep somewhere safe. And the paycheck will get bigger - and keep her off the streets for good - if she can dig up dirt on Will Fray, the irritatingly hot "shy guy" of the band.
Problem is, Will Fray isn't who everyone thinks he is. In fact, he's not Will at all. Matt, Will's identical twin, is actually the guy onstage, reluctantly covering for his brother while he's in rehab. To make matters worse, Matt's being shadowed by a cute reporter with troubled eyes determined to get the scoop. On him. And he's having trouble finding the willpower to keep his distance...
But if the secret gets out, it won't just be his head on a platter - it'll be the whole band's.
This Entangled Teen Crush book contains steamy make out scenes, graphic language, and a love story so hot your copy may spontaneously burst into flames. You've been warned.
Author Site: website

A little far-fetched but I still loved it. (5 stars)

Awwww you guys! While ANYA AND THE SHY GUY had a couple of tiny continuity issues and it was pretty far-fetched, I couldn't help myself. I loved it.

There's always something fun about the twin-swap in a romance and I totally fell hard for Will/Matt. If you adore the funny types I think you'll like him too. I couldn't help but picture a teenage version of an adorable celeb who recently became a mega-star. Anya on the other hand, earned a very special place in my heart more based on circumstance than personality. I have a big soft spot for teens who are or have been homeless, especially the ones who are smart enough to pull off what Anya does. I really wanted her to get her big scoop but at the same time I hated the idea of her story destroying S2J. I think you'll be as pleased as I was with the way their story plays out.

I came in late to the series and read DAISY AND THE FRONT MAN first and I think you could almost do the same for AATSG but I would recommend starting from the beginning. There's enough back story about who the secondary characters are that felt unexplained enough I think you would enjoy it more if read in order. That said, it's going to be well worth the wait.

Nice review. I read Mia and the Badboy and I wasn't a huge fan of it. I just didn't connect with the characters. However, I like the dynamic of the MC's of this one. It sounds like a great cast of characters.