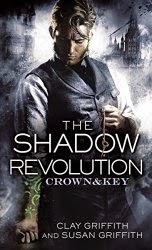 The Shadow Revolution (Crown & Key #1) by Clay Griffith & Susan Griffith
Fantasy, Magic, Alternate History, Steampunk
Ebook/Print/Audio (322 pages, DEL REY)
A thrilling new Victorian-era urban fantasy for fans of Kevin Hearne’s Iron Druid Chronicles, the Showtime series Penny Dreadful, and the Sherlock Holmes movies featuring Robert Downey, Jr.
They are the realm’s last, best defense against supernatural evil. But they’re going to need a lot more silver.
As fog descends, obscuring the gas lamps of Victorian London, werewolves prowl the shadows of back alleys. But they have infiltrated the inner circles of upper-crust society as well. Only a handful of specially gifted practitioners are equipped to battle the beasts. Among them are the roguish Simon Archer, who conceals his powers as a spell-casting scribe behind the smooth veneer of a dashing playboy; his layabout mentor, Nick Barker, who prefers a good pub to thrilling heroics; and the self-possessed alchemist Kate Anstruther, who is equally at home in a ballroom as she is on a battlefield.
After a lycanthrope targets Kate’s vulnerable younger sister, the three join forces with fierce Scottish monster-hunter Malcolm MacFarlane—but quickly discover they’re dealing with a threat far greater than anything they ever imagined.
Author Site: website

If you love alternate histories where magic and supernatural creatures are key elements buckle your safety belt, you're going to enjoy the Crown & Key trilogy. I quickly found the comparison to Penny Dreadful to be quite apt though I thought the other comparisons were trying a shade too hard. An ensemble cast of magicians, monster hunters, and civilians take on a really big bad evil in Victorian London in this clash of might and magic.

It takes an incredible lot to make my skin crawl as a reader and the Griffiths managed to do so twice in THE SHADOW REVOLUTION. The characters were each well fleshed but I felt like only the surface of each was scratched, I'm hoping the next installment reveals more about who they are. This was also one of those times where I felt there may have been too many characters and not enough story to go around for each to shine. The pseudo science and magic felt much more aetherpunk than steampunk but I think fans of both will find it enjoyable.

While I found it a little dry, TSR is a terrific introduction to an alternate history that is sure to entertain fantasy and horror fans who love monsters and magic. I would highly recommend it to readers who have enjoy the Griffiths' Vampire empire series, Megan Shepherd's Madman's Daughter trilogy, or The Diabolical Miss Hyde by Viola Carr.


Also coming from these authors: