Review: Remember Me by Nina Croft 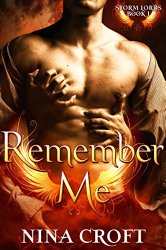 Remember Me (Storm Lords #1) by Nina Croft
Paranormal Romance, Angels
Ebook (75 pages, SELFPUBLISHED)
Unable to bear the thought of losing his mortal wife, Caden Wolfe steals the Elixir of Life and offers her eternity. But the theft is discovered, his wife is slain, and Caden is stripped of his angel wings and cast down into the Abyss.
Having drunk of the Elixir of Life, Phoebe Little’s soul is tied to the earth in a perpetual cycle of death and rebirth. Unaware that she has lived countless lives, Phoebe is haunted by the loss of a love she has no memory of.
Caden has spent a thousand years searching for his wife. Now he has found her, and only Phoebe’s love can redeem them both. But Phoebe fell in love with an angel, and Caden is now a demon of the Abyss. Can she see past what he has become, remember the love they once shared, and have a second chance at forever?
Author Site: website

I'm a total sucker for a reincarnation romance and Nina Croft's new Storm Lords series is all about them! After Cade steals the Elixir of Life and gives it to his beloved the consequences for his theft are as bad as they can get. Now he has to get Phoebe to remember that she was once his wife and that she loves him or she'll die again.

It's admittedly weak on the overall fleshing out of the characters and some of the plot but for a short and sexy read I found it enjoyable. I really would have liked to get to know them individually a bit more before they were thrust together in close quarters, as I never quite felt invested in their happy ending happening. Croft has a great writing style that always managed to invoke an urgency to the romance and REMEMBER ME is no exception. The ending was pretty anticlimatic but suited the overall reincarnation concept well.

In some way it reminded me of a Gena Showalter book so I think fans of her Lords of the Underworld will like it.