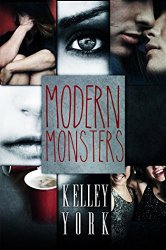 Modern Monsters by Kelley York
Young Adult, Social Issues
Ebook/Print (352 pages, ENTANGLED TEEN)
Vic Howard never wanted to go to the party. He's the Invisible Guy at school, a special kind of hell for quiet, nice guys. But because his best friend is as popular as Vic is ignored, he went...
And wished he hadn't.
Because something happened to a girl that night. Something terrible, unimaginable, and Callie Wheeler's life will never be the same. Plus, now Callie has told the police that Vic is responsible. Suddenly, Invisible Vic is painfully visible, on trial both literally, with the police, and figuratively, with the angry kids at school. As the whispers and violence escalate, he becomes determined to clear his name, even if it means an uneasy alliance with Callie's best friend, the beautiful but aloof Autumn Dixon.
But as Autumn and Vic slowly peel back the layers of what happened at the party, they realize that while the truth can set Vic free, it can also shatter everything he thought he knew about his life...
Author Site: website

I don't read a lot of contemporary YA with a focus on social issues but Entangled Teen has been bringing out so many that I finally gave a few a try and so far I've been really impressed with what the publisher is bringing to the audience. MODERN MONSTERS is no exception with a frank look at sexual assault but more specifically how it can affect the falsely accused. It was an interesting concept to see explored and I enjoyed getting such an infrequently portrayed perspective on a very painful subject.

Vic is a character I wouldn't usually expect to find as a YA protagonist. He's not particularly smart or talented but neither is he described as someone who gets bullied. As MM plays out though, he has a certain quality to him that makes him sympathetic. I really liked Autumn and together how they took risks to find the real rapist. I predicted the two big twists to the story though I think that even if you see them coming you'll find it interesting and thought provoking.

If you enjoy books that make you think or that challenge your perception of social issues MM is an engrossing read sure to give you conversation fodder. For those who are sensitive to/triggered by sexual assault I feel compelled to mention that while it is what the plot centers around, it happens off page and is never described beyond a few small details.