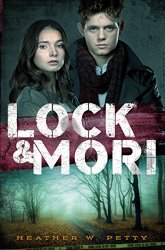 Lock & Mori by Heather W. Petty
Release Date: September 15th, 2012
Young Adult, Reimagining, Mystery
Ebook/Print (256 pages, SIMON & SCHUSTER)
In modern-day London, two brilliant high school students—one Sherlock Holmes and a Miss James “Mori” Moriarty—meet. A murder will bring them together. The truth very well might drive them apart.
Before they were mortal enemies, they were much more…
FACT: Someone has been murdered in London’s Regent’s Park. The police have no leads.
FACT: Miss James “Mori” Moriarty and Sherlock “Lock” Holmes should be hitting the books on a school night. Instead, they are out crashing a crime scene.
FACT: Lock has challenged Mori to solve the case before he does. Challenge accepted.
FACT: Despite agreeing to Lock’s one rule—they must share every clue with each other—Mori is keeping secrets.
OBSERVATION: Sometimes you can’t trust the people closest to you with matters of the heart. And after this case, Mori may never trust Lock again.
Author Site: website

Reimaginings and retellings are some of my favorite reads so I was eager to read LOCK & MORI. The blurb had me anticipating a much different read from what it was though. If you're a fan of Sherlock Holmes in any of his incarnations that have come before you might be disappointed with it, I know I sure was.

The first problem was that Mori is narrating the story and therefore Sherlock is very much just a side character. It's almost painful to read how much he's forced into the love-interest role and lacks the deductive traits that usually define who he is as a character. Not to say he isn't a character worthy of being turned into a romantic foil for a female Moriarty I just felt Petty's particular take on it was bland and uninspired.

If you go in knowing ahead of time it's a romance you might be able to enjoy it but I was really disappointed. There is a mystery to solve and it is an important device to move everything forward and yet it's so predictable I was left wondering when the twist would come. As much as it pains me to say it, I just didn't like it. It was a struggle to finish and the ending made me roll my eyes. It was a weird way to end it considering this is intended to be a series.

I don't even know whom I could reasonably recommend it for. Very young YA readers who have no previous experience with Holmes reimaginings I maybe?