Review: Hunter of Her Heart by Kaylie Newell 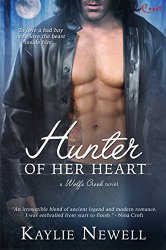 Hunter of Her Heart (Wolfe Creek #2) by Kaylie Newell
Paranormal Romance, Category Romance, Werewolves
Ebook (173 pages, COVET)
To love a bad boy is to love the beast inside him...
Bad boy Zane Wolfe has always been wild and reckless. Even though he's hot for his high school sweetheart, Candi Brooks, settling down has never been in his plans. Beyond that, he's changing in strange ways-and begins to wonder if there's truth to the local folklore that claims his family is cursed to be werewolves...
There's never been a time when waitress Candi didn't have a serious weakness for Zane and his intense, dark sex appeal. She craves him. But after her life changes dramatically, and Zane won't commit, Candi's reached her limit. She can't wait forever...so she's taking her heart off the table before it gets good and broken.
Something mysterious is going on in Wolfe Creek, and danger stalks Candi. Zane will do anything he can to protect her. But the one person she needs protection from might just be him...
Author Site: website

A rough starter but with a good ending. (4 stars)

Every once in a while a read comes along that starts off not so hot where I almost give up on it. HUNTER OF HER HEART got off to a tough start. Zane wasn't very likable and Candi wasn't helping that by being a bit of a flake. I was bummed because I had enjoyed them in LONE WOLFE PROTECTOR and I always love seeing secondary characters get together later in a series. The first third of the book had me ready to call it but I decided to stick it out just a little bit longer. Which I'm glad I did because the story picked up quite a bit.

If you're like me and commitment-phobe heroes make you cringe I think you'll find yourself in the same boat I was in. I wanted to think that it was because of Zane's secret but it seemed more just his personality and that didn't work for me. Once Candi brings in a good reason for him to commit even then he gets all wishy-washy but the process slowly starts.

What ultimately saved this one from a lower rating was that once they started sorting their stuff out I liked Candi and Zane together. They felt more real than most paranormal romance couples are and that made me want them to find their HEA ending. While it was flawed enough I almost gave up on it, I also felt like the latter half of the story was good enough that most readers might like it.