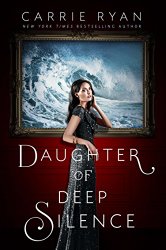 Daughter of Deep Silence by Carrie Ryan
Young Adult, Thriller
Ebook/Print/Audio (384 pages, DUTTON)
I’m the daughter of murdered parents.
I’m the friend of a dead girl.
I’m the lover of my enemy.
And I will have my revenge.
In the wake of the devastating destruction of the luxury yacht Persephone, just three souls remain to tell its story—and two of them are lying. Only Frances Mace knows the terrifying truth, and she’ll stop at nothing to avenge the murders of everyone she held dear. Even if it means taking down the boy she loves and possibly losing herself in the process.
Sharp and incisive, Daughter of Deep Silence by bestselling author Carrie Ryan is a deliciously smart revenge thriller that examines perceptions of identity, love, and the lengths to which one girl is willing to go when she thinks she has nothing to lose.Author Site: website

I love a good revenge thriller so I was really eager to devour DAUGHTER OF DEEP SILENCE. It was quite engrossing though I'll admit I had a hard time getting into it for almost the first hundred pages. I can't talk a lot about the actual plot or even Frances without spoiling things that I think you should get to enjoy as you read it but I will say that there's an awful lot of build up for such a weak ending.

It reminded me a little bit of the show Revenge and also The Lying Game, neither of which I could watch more than a few episodes of in their first seasons. So if you enjoyed either or both you might really enjoy DODS. It had some plot holes that I felt needed to be plugged better but if you can suspend a certain amount of disbelief to enjoy the revenge plot I think you'll enjoy it.

While I didn't love it and found the ending a big disappointment I think this would make a great stand alone beach read.