Releasing 06/17/2015 exclusively at www.bookstrand.com/celeste-prater and 6-8 weeks later at major retailers 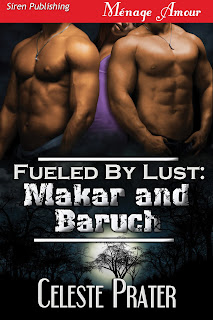 A quick mission to retrieve a bag of blood leaves Makar Decanus and Baruch Abella’s head spinning when they stumble upon their potential mate. Unknown to them at the time, this isn’t just any ordinary doctor with sea-green eyes and a tantalizing scent of violets. She might very well be the catalyst leading to the destruction of the Insedi race.

Dr. Keely Anderson thinks she’s on to something wondrous when not one, but three patients reveal they’ve seen men disappearing before their eyes. Undaunted by her prick boss’s demand she stop investigating, Keely finds herself swept into the arms of two overwhelming males that want to see her permanently positioned between their sexy as hell bodies. But will her heartrending past keep them at arm’s length?

Book 7 in the Fueled By Lust Series will pull at your heartstrings, make you gasp at the action, and have you fall head over heels in love once again with the Insedi race.


Squatting next to the mattress, Keely took her time looking over the gorgeous bodies splayed out for her inspection. Makar was on his stomach, head smashed to the pillow clutched tightly in his arms. The sheet was barely covering the top of his perfect ass. A long, thick muscle ran from just under his arm, along his side, and tapered down before meeting his narrow waist. She now knew what made his back flare out like wings when he’d lifted his arm and caressed her cheek last night.

Baruch, on the other hand, was splayed out on his back with one big arm thrown over his eyes and the other lying peacefully by his side. The twin to Makar’s necklace lay nestled in the hollow of his throat. One big thigh was hanging over the lip of the mattress. His calf muscle was just as defined as the rest of his body.

Scooting a little closer, Keely watched in appreciation as his perfectly delineated abdominal muscles rose and fell in a steady rhythm. His other leg was tangled in the sheets, giving her a perfect view of his long, fat cock resting on his stomach. Even in repose, the thing was daunting. She admired his healthy ball sac. Even though he was completely free of hair, he screamed of powerful, virile alpha male. Makar’s attributes may be hidden from her sight, but she knew full well they were equally matched in what they were both packing below the belt.


Please hop to the other tour stops for more excerpts! 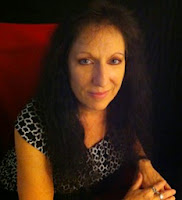 Celeste was born and raised in a small town between Dallas/Fort Worth and Austin. Wanting to see more than her small Texas town, she joined the Marines, which satisfied her craving to see more of the U.S. and her drive to see if she could be one of the few and the proud.

A firm believer in educating the mind, Celeste has achieved several advanced degrees, the latest being a master’s of science.

Drusus, Severus, Cato, Lucien, Caelius, Maxim and many more have swirled in her dreams until she had to bring them to life and allow them to find love within the pages of the Fueled by Lust book series.


Celeste Prater is awarding a randomly drawn commenter a $20 Amazon/BN gift card via Rafflecopter.
a Rafflecopter giveaway
Posted by Rhianna at 6/17/2015

Thanks for hosting me on your site today! Going to be a great tour! :-)

This is going to the top of my TRL. Too hot to put aside for later. Thanks for sharing.
Carol L
Lucky4750 (at) aol (dot) com

I liked both the blurb, and the excerpt. I am purchasing this book on my next book shopping spree (I love paranormal romances).