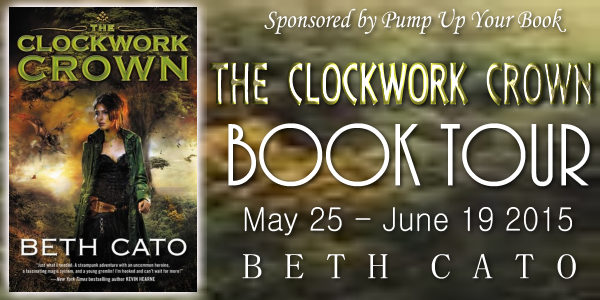 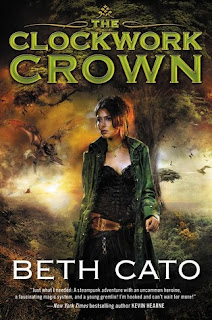 Rich in atmosphere, imagination, and fun, the action-packed, magic-filled sequel to The Clockwork Dagger is an enchanting steampunk fantasy, evocative of the works of Trudi Canavan and Gail Carriger
Narrowly surviving assassination and capture, Octavia Leander, a powerful magical healer, is on the run with handsome Alonzo Garrett, the Clockwork Dagger who forfeited his career with the Queen’s secret society of spies and killers—and possibly his life—to save her. Now, they are on a dangerous quest to find safety and answers: Why is Octavia so powerful? Why does she seem to be undergoing a transformation unlike any witnessed for hundreds of years?
The truth may rest with the source of her mysterious healing power—the Lady’s Tree. But the tree lies somewhere in a rough, inhospitable territory known as the Waste. Eons ago, this land was made barren and uninhabitable by an evil spell, until a few hardy souls dared to return over the last century. For years, the Waste has waged a bloody battle against the royal court to win its independence—and they need Octavia’s powers to succeed.
Joined by unlikely allies, including a menagerie of gremlin companions, she must evade killers and Clockwork Daggers on a dangerous journey through a world on the brink of deadly civil war.

Due to unforeseen circumstances... I am the suck and was not able to get my review copy of THE CLOCKWORK CROWN and even the coding for the post had to be redone by me because my blog didn't want to make it work. lol It literally messed up my blog's entire code so I spent two days behind the scenes trying to fix it and then an afternoon recoding this post. So apologies for no review today darlings! Instead please enjoy this excerpt from the first chapter and leave a comment telling me what you think of it. To make up for my mistake... if the post gets more than 10 comments (from unique commenters, not one person commenting 10 times lol) by midnight MST today I'll give away a Kindle copy of either THE CLOCKWORK DAGGER or THE CLOCKWORK CROWN (winner's choice) to one of those commenters who has left their email address in their comment. -- Rhi

As she rode through the snowy wilderness of far southern Caskentia, Octavia Leander's spirits were buoyed by three thoughts: that although she fled from assassination and capture, she was undoubtedly in one of the most beautiful places she had ever seen; that thus far they had survived a full week without any sign of pursuit by horse or buzzer; and that her companion in the hard journey was Alonzo Garret, a man who had forfeited his career as a Clockwork Dagger--and possibly his life--in order to keep her alive.

Considering the dire circumstances, he made for delightful company.

Alonzo rode ahead on a chestnut bay stallion, their gray pack horse following close behind. This far from civilization, the world was utterly quiet but for the jingling of tack, the horses' breathing and the steady rhythm of their hooves, and the radiant life songs of the horses, Alonzo, and any wildlife within close range. In particular, she took comfort in the ever-present marching band brasses of Alonzo's life essence; she would recognize his particular notes in any crowd.

Since childhood, she had known people's and animals' health woes by their music, but only in a generic sense. She didn't hear specifics unless they had an open wound or she placed the patient in a circle to ask for the Lady's direct intervention.

The Lady's Tree moored its roots to the very spirit of the earth. Through the Tree, Octavia could heal with prowess beyond any other known medician. Lately, however, the Lady's magic had changed. Octavia had changed. Her power through the Lady had increased, and Octavia wasn't sure if it was truly for the better.

As if he sensed her attention, Alonzo glanced back. A Waster's fur-fringed hood framed his face and contrasted with the warm nutmeg tone of his skin. A coarse black beard lined his jaw. His song was ragged in weariness, his heart steady in its anxiety. His mechanical leg--though masterfully designed--could not help but grind the joint against his flesh below his knee. She had treated him with pampria and heskool root over the past few days to ward against infection. His leg pained him again now, but even so, his smile to her was tender. Heat bloomed in her own chest, along with a sense of terrible sadness.

She had told Alonzo that she wanted to search the famed libraries of the southern nations to find out where the Lady's Tree may be found. Alonzo knew that Octavia sought a greater understanding of her own magic through the Lady, but he didn't know of all the ways that her power was changing. Or how it terrified her.

How had Octavia's blood, combined with a true branch from the Lady's Tree, caused a massive tree to grow temporarily? That tree had acted in her defense and torn apart the men of the Waste who had tried to hold her captive. The branch that had done that was now tied to her saddlebag. It was green as if freshly cut, and hummed with life like any person or animal.

Then there had been the moment after she had pulled Alonzo from the edge of death. She had kissed him, and with the touch of her lips she had gone beyond her knowledge of his body's song. It was as if she had become immersed in his very soul, that she could pry apart his body's instruments and manipulate his health without any restrictions from the Lady's herbs.

That had frightened her even more than the persistent threats of both Caskentia and the Waste.

A flock of birds fluttered overhead, anxiety driving them as if they were pursued. Octavia craned around. The sky was a blanket of gray, the wind sharpened by early winter.

"Something alarmed the birds."

"To the trees, quickly."

Their horses pounded down the hill, the action reverberating through her constantly-aching leg muscles. Thin snow sloshed underfoot. The forest welcomed them with a slap of branches and a shower of pine needles and ice. Roads had been scarce, signs of humanity scarcer. A good thing, in truth, though the long days of slow progress had permanently imprinted the saddle's curve into her backside.

"We should be nearing the Caskentian border. 'Tis a likely place for patrols to be wary for us." Alonzo reined up.

Octavia listened past the songs of wildlife around her. "I hear a buzzer." That's what I get for counting my blessings. I jinxed us.

"Yes. He is likely flying amongst the low clouds. Our tracks are bold on the snow." Alonzo pressed his horse onward, staying in the trees. She followed, brush scraping her legs. Trees crowded close.

Because of the unusual strength of Octavia's skills, the settlers of the rogue territory known as the Waste had sought to capture her and use her against Caskentia. The Caskentian royal court, true to form, caught wind of this plot and thought the tidiest solution was Octavia's death.

She had known all her life that her government was as rotten as unsalted meat left out on a summer afternoon--the sort that looks fine to eat, and makes you pray for a merciful end hours later--but she had never expected them to send Clockwork Daggers to assassinate her. But Alonzo Garret, in the guise of an airship steward, had refused to carry out his assigned task.

"It could just be normal Caskentian border patrol, right? Perhaps they don't know to look for us?"

The buzzer roared overhead. Alonzo looked up with a grimace. "'Tis my hope that our feint will last longer, but I dare not be too positive. Our circuitous route has taken us a week. By now they are well aware of what transpired aboard the Argus and have tracked the Wasters' trail to where we did battle. If they suspect we are alive and free, our choices of destination are few."

"Well, we certainly couldn't go to the Waste, though that's where most criminals would flee. That leaves the southern nations as the obvious choice."

"An obvious choice, but not the only. There is always Mercia. 'Tis a warren. A person could lose their own shadow in those environs, and within a stone's throw of the palace."

And many stones are being thrown that way, I'm sure, knowing how people feel about Queen Evandia.

Mercia was Caskentia's capital, a sprawling city of half a million, a place of countless factories and miserable refugees. Octavia had never been there--never wished to go there, with its reputation for foul air, sickness, and utter lack of vegetation. Such denseness of humanity was the stuff of her nightmares; considering how she could hear Alonzo's song now, she dreaded to think of what it would be like to be surrounded by the starving and sick.

No trees lay ahead. Alonzo sucked in a sharp breath and reined up. "Damn."

She knew it had to be bad if he used that sort of language in front of her. She drew up alongside him. "What is--? Oh."

They had reached the end of Caskentia.

Beth Cato hails from Hanford, California, but currently writes and bakes cookies in a lair west of Phoenix, Arizona. She shares the household with a hockey-loving husband, a numbers-obsessed son, and a cat the size of a canned ham.

She’s the author of THE CLOCKWORK DAGGER steampunk fantasy series from Harper Voyager. The newest book, THE CLOCKWORK CROWN, comes out on June 9th, 2015.

Book reviewed at To Read, or Not to Read

Interviewed and Guest blogging at Mom with a Kindle

Guest blogging at I Smell Sheep

Book featured at Chosen By You Book Club

Book reviewed at A Peek at My Bookshelf

Book reviewed at Booked on a Feeling

Book reviewed at Nicole Has Read

Book excerpt at Review From Here

Guest blogging at Bent Over Bookwords

Guest blogging at The Dark Phantom

Book excerpt at The Revolving Bookshelf

Book excerpt at The Literary Nook

Wow, it does sound interesting. Sorry for all your problems
debby236 at gmail dot com

Wow! I started _The Clockwork Dagger_ ... thanks to a service called Bookshare which lets people who are blind/visually impaired or who have reading disablities download books at no cost. Alas, I lost the book because of a crash, and it would be wonderful to read that first book again and buy the second book later. My email is juanitatighan@gmail.com Also, sorry you had so many issues and weren't able to get the book and review it. Hopefully things will get easier.

Awww thanks for the kind words guys! Sometimes life just gets in the way of being the best blogger I can be. Hopefully I can get both books bought and read soon.

Thanks for stopping by and commenting! ♥