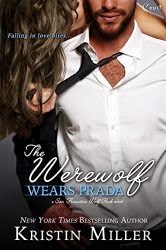 The Werewolf Wears Prada (San Francisco Wolf Pack #1) by Kristin Miller
Paranormal Romance, Werewolves
Ebook (230 pages, COVET)
Falling in love bites...
Melina Rosenthal worships at the altar of all things fashion. Her dream is to work for the crème de la crème fashion magazine, Eclipse, and she'll do much anything to get there. Even fixing up the image of a gorgeous, sexy public figure who's all playboy, all the time. Even if he's the guy who broke her heart a year ago...
Even if Hayden Dean is a werewolf.
Since his father's death, Hayden's the heir apparent to the San Francisco Wolf Pack-well, once he settles down. Hayden isn't interested in giving up his partying ways, except he's pretty sure he's found his fated mate, and the fact that she's a non-shifter is bad news. Now he must find a compromise between the traditions of his wolf world and his certainty that Melina is his...before fate (or another werewolf) bites them both in the butt.
Author Site: website

Fated mates fans this is right up your alley. (3 stars)

Man do I love me some Covet imprint reads and one of the authors doing some great stuff in it is Kristin Miller... even my mom is a fan after I recommended she check them out. If you've read her Seattle Wolf Pack stories already you'll just be relocating within the same world, if you're starting with the San Francisco Wolf Pack don't worry, you don't need to read the other first but I recommend going back and reading the former at some point.

THE WEREWOLF WEARS PRADA has a celebrity-ish vibe that I didn't really care for but that I think a lot of other readers will enjoy. Hayden Dean is a sexy playboy... but I was never really sure how he became a public figure considering the whole werewolf thing. So far, he's my least favorite of Miller's heroes, I really disliked his personality and the way he treated Melina. In contrast, I liked Melina a lot. She's intelligent and driven, I just wish she hadn't let Hayden get away with a lot of what she let him do to her.

If you prefer your paranormal romances to have fated mates—but focus more on them getting together than the paranormal elements—TWWP is an easy low-conflict read that's sure to satisfy. It wasn't quite what I'm into since I don't like fated mates plots very much so I think my rating is going to much lower than most.

Also, please enter the giveaway!
a Rafflecopter giveaway
Posted by Rhianna at 4/28/2015

I've still not managed to read this line of theirs. I LOVE the Brazen and Bliss ones though. One day I'll have to start these.