Review: The Handler by D.R. Graham 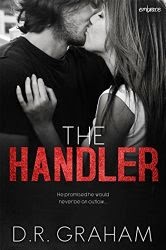 The Handler by D.R. Graham
New Adult, Contemporary Romance, Biker
Ebook/Print (256 pages, EMBRACE)
He promised he would never be an outlaw . . .
While searching for the member of an outlaw motorcycle gang who murdered his dad, Cain Allen is offered a boatload of cash to "handle" the stunning teen popstar Lincoln Todd. Although he doesn't need the headache of a high-maintenance celebrity, getting out of town will help him keep a low profile until he testifies against the other two killers.
Touring Europe with Lincoln proves to be more complicated than Cain anticipated, and despite his efforts, the line between their personal and professional lives blurs. She's sweet, smart, and totally unpredictable. And he loves it.
But Lincoln's association with Cain puts her in more danger than anyone could have imagined. When he joins forces with the Noir et Bleu Motorcycle Club to protect her, Cain discovers the lengths he's willing to go, and the person he's willing to become to protect the people he loves...
Author Site: website

Every once in a while a book comes along that I don't even need to finish before I'm telling everybody I can get to listen, "go buy this NOW!". Not only is this one of those books, I have a feeling I'm going to be doing that a lot with D.R. Graham books.

THE HANDLER is a wild ride that kicks the engine on and doesn't let up pace until the end. I'm quite bewildered that there wasn't a higher page count because there is so much packed into this story and none of it ever feels superfluous. With the characters facing the chaos of celebrity life topped with a side of dangerous dudes trying to kill Cain there is a lot of action. From Oslo and Miami to Paris and Montreal the adventure is a world tour in itself. Every character, including the secondaries, is complex and interesting and while they naturally follow certain stereotypes to a point they never feel like caricatures.

Lincoln's world of celebrity life is a terrific mash-up of real stories we know. I thought for sure I was going to hate her but Graham masterfully writes her through the snotty star intro into someone with so much depth I wound up loving her. I don't generally dig first person narratives in romance but getting the story through Cain's really worked. He's unexpectedly treading the line between Alpha male and beta and as a reader who prefers the latter I really enjoyed how he could roll with the Noir et Bleu crew without attempting some cave man romance hero antics. Hands down, he's one of my new favorites and I think it's going to take a lot for another to unseat him.

While I wouldn't call this an MC romance because Cain isn't a member and his affiliation is pretty circumstantial I do think fans of the subgenre will enjoy it a lot. If you're a big New Adult reader this is one I would recommend to you and the newbies both, I don't read a lot of NA and this is one series that is going to keep me coming back over and over. Haven't read ONE PERCENTER yet? Each of the Noir et Bleu stories stands alone so they can be read in any order. Do yourself a favor... go buy them now and you can thank me when you post your review. ;)