Review: Dragons Are People, Too by Sarah Nicolas 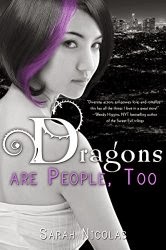 Dragons Are People, Too by Sarah Nicolas
Young Adult, Dragons
Ebook/Print (199 pages, ENTANGLED TEEN)
Never judge a dragon by her human cover...
Sixteen-year-old Kitty Lung has everyone convinced she's a normal teen--not a secret government operative, not the one charged with protecting the president's son, and certainly not a were-dragon. The only one she trusts with the truth is her best friend--and secret crush--the über-hot Bulisani Mathe.
Then a junior operative breaks Rule Number One by changing into his dragon form in public--on Kitty's watch--and suddenly, the world knows. About dragons. About the Draconic Intelligence Command (DIC) Kitty works for. About Kitty herself.
Now the government is hunting down and incarcerating dragons to stop a public panic, and a new shape-shifting enemy has kidnapped the president's son. Kitty and Bulisani are the last free dragons, wanted by both their allies and their enemies. If they can't rescue the president's son and liberate their fellow dragons before getting caught themselves, dragons might never live free again.
Author Site: website

Two thumbs up for diversity and butt-kicking! (4 stars)

Two huge thumbs up to Sarah Nicolas for making her protagonist and love interest not-white. I was so thrilled to get some diversity up in my ereader! Not only that, they were both great characters. Kitty wouldn't even know how to step back and let someone else trample her decision making and she holds her own against foes. If you prefer Katniss or Tris types of heroines you will love Kitty and Bulisani is an excellent match for her.

What made DRAGONS ARE PEOPLE, TOO really different is that these are characters who don't have any idea what it means to be human. Their way of thinking is really different and at times that doesn't read as well as I wish it did. I found myself occasionally frustrated with it and yet liking it at the same time, it felt authentic even if it didn't make sense to my human way of thinking things should be done. It definitely will not work for everyone. Also, unlike most YA they don't think like teenagers either. They think like soldiers/spies because that's very much what they are for their kind.

Action-driven and diverse, I would very much recommend it for readers who found Julie Kagawa's TALON a bit too romance-centered and fluffy. I liked it a lot and would really like to see more books like it.

I thought the characters were great! Although Kitty makes a few hasty decisions, I think she felt pretty mature for her age, probably because of all the training. And action driven is a good way to describe it, there certainly was a lot of action.