Review: After the Red Rain 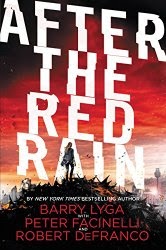 After the Red Rain by Barry Lyga with Peter Facinelli and Robert DeFranco
Young Adult, Futuristic, Science Fiction
Release Date: August 2015
Ebook/Print/Audio (400 pages,  LITTLE BROWN)
A postapocalyptic novel with a cinematic twist from New York Times bestseller Barry Lyga, actor Peter Facinelli, and producer Robert DeFranco.
On the ruined planet Earth, where 50 billion people are confined to megacities and resources are scarce, Deedra has been handed a bleak and mundane existence by the Magistrate she works so hard for. But one day she comes across a beautiful boy named Rose struggling to cross the river--a boy with a secretive past and special abilities, who is somehow able to find comfort and life from their dying planet.
But just as the two form a bond, it is quickly torn apart after the Magistrate's son is murdered and Rose becomes the prime suspect. Little do Deedra and Rose know how much their relationship will affect the fate of everyone who lives on the planet.

Dark and gloomy but oh-so-absorbing... (4 stars)

I've been making a habit of randomly picking up books that I see on Instagram and reading them without even having read the blurb. It's been a fun experiment and so far AFTER THE RED RAIN has probably been one of my favorites. It has one of the best opening chapters I've read in ages. I actually started it while sitting in a waiting room and had to hold back all the winces and pained faces I wanted to make... then a few days later I read it out loud to my husband. The next night as I sat reading he asked me how my morbid book was going. lol

So if you want to jump into a read that's dark and dreary and a little depressing I definitely recommend picking up AFTER THE RED RAIN. If you enjoy romantic sub-plots, however, this is also deeply satisfying on that level. Where I feel it really shines though is as a science fiction parable with a focus on ecology. This is one YA world you won't want to live in.

Deedra is strangely naive and I honestly found her tough to like at times. In contrast Rose is very intriguing and about as mysterious as a character can get. Without spoiling anything I'll just say that I really, really hope there will be further books to follow because I still have so many questions about him. Most of the secondary characters play vital but small roles in the storyline.

On the whole, this is a book that is really fast-paced and engrossing with it's only major flaw being that it might have had a few too many fingers involved in the plotting. If you're at all into YA scifi and post-apocalyptic I'd definitely suggest you check it out.