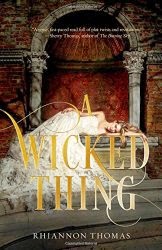 A Wicked Thing by Rhiannon Thomas
Young Adult, Fantasy, Fairytale Retelling
Ebook/Print/Audio (352 pages, HARPERTEEN)
Rhiannon Thomas's dazzling debut novel is a spellbinding reimagining of what happens after happily ever after. Vividly imagined scenes of action, romance, and political intrigue are seamlessly woven together to reveal a richly created world… and Sleeping Beauty as she's never been seen before.
One hundred years after falling asleep, Princess Aurora wakes up to the kiss of a handsome prince and a broken kingdom that has been dreaming of her return. All the books say that she should be living happily ever after. But as Aurora understands all too well, the truth is nothing like the fairy tale.
Her family is long dead. Her "true love" is a kind stranger. And her whole life has been planned out by political foes while she slept.
As Aurora struggles to make sense of her new world, she begins to fear that the curse has left its mark on her, a fiery and dangerous thing that might be as wicked as the witch who once ensnared her. With her wedding day drawing near, Aurora must make the ultimate decision on how to save her kingdom: marry the prince or run.
Author Site: website

You can take the Disney out of the story but... (2 stars)

Fairytale retellings have never been hotter in YA than they seem to be right now and as a fan I thought I could never get enough of them. A WICKED THING sounded like a brilliant take on Sleeping Beauty, a delightful break from the source material and Disney-fied versions. But I was left feeling a bit sleepy about it all myself.

When Princess Aurora is awakened from 100+ years of sleeping in her tower and finds out that she's a pseudo-celebrity with pretty much no rights she's more than a tiny bit dazed by it all. According to the current ruling family only her true love can have woken her and therefore she must marry their son, the prince. With zero preamble she's swept up into her new prison under the eye of a merciless king, a vindictive queen, and the gentle, but spineless prince. In a few weeks they will be married and the kingdom saved... but from what?

As much as I liked the idea of Sleeping Beauty being awoken to find she's not in love with her savior, that she would have to fight to save herself, and the great twist involving the witch... I was really disappointed with A WICKED THING. Aurora was weak and pathetic. I kept waiting for her to suck it up and start fighting for herself. Prince Rodric is even worse. As much as I wanted this to have a feminist bent I felt like making the prince lack any strength of character did that a disservice. There were two other young men who play roles in her story and I did like that none of them ever really becomes a love interest.

The story drags and drags, held down by boring chapters of political hullabaloo and the queen being a snot. I wanted to like it and I was pleased with the ending but I don't think I will bother with reading the next book. I just cannot abide a heroine this cowardly and weak.

You might like this book if you've never read a good fairytale retelling before. Alas, I would recommend reading PRINCESS OF THORNS by Stacey Jay instead, now that is a feminist take on Sleeping Beauty I can get behind.