Review: The Originals: The Loss by Julie Plec 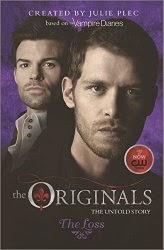 The Originals: The Loss by Julie Plec
Fantasy, Vampires, Werewolves, Witches
Ebook, Print, Audio (336 pages, HQN)
Family is power. The Original vampire family swore it to each other a thousand years ago. They pledged to remain together always and forever. But even when you're immortal, promises are hard to keep.
After a hurricane destroyed their city, Klaus, Elijah and Rebekah Mikaelson have rebuilt New Orleans to even greater glory. The year is 1766. The witches live on the fringes in the bayou. The werewolves have fled. But still, Klaus isn't satisfied. He wants more. He wants power. But when Klaus finally finds a witch who will perform a spell to give him what he desires most, she secretly uses Klaus to unleash a curse—one that brings back hundreds of her ancestors—and begins a war to reclaim New Orleans. As the siblings fight off the attack, only one thing's for certain—the result will be a bloodbath.

Family is power... welcome to the bloody chapter. (4 stars)

After the richly characterized and well plotted THE ORIGINALS: THE RISE I was very eager to see where the Mikaelson siblings' story would pick back up. Forty-plus years later they've tamed New Orleans. With the witches and werewolves banished to the swamps they've built a vampire army with Elijah running the city. But Klaus has never recovered from losing Vivianne and he's willing to pay any cost to get her back.

I was quite surprised at how different The Loss was from The Rise. The first book really established a great foundation for the series and I felt like the character development was well done but the same felt very flat in The Loss. The story focused so much on fighting—and I do mean actual physical battles and combat—that I felt quite disconnected from it. It's always enjoyable to see these characters in a good fight but there was just so much of it happening chapter after chapter that I felt it a bit overkill. Some of that may have been caused by the fact that it alternates POVs between the three siblings so the same scene might be rehashed from another angle with new information that overlaps.

Of the three Mikaelsons I felt like Elijah got the most character development here but even his wasn't much. A new love interest is introduced for him that I'm curious to see played out in The Resurrection. Klaus is much more somber and less broody than is typically his flavor which suits his role as mourning lover but also makes him less fun to read. Rebekah shows more maturity and depth than she usually is attributed and I liked her attempts at being the reasonable sibling.

Overall, this was another enjoyable, if a little less rich on character, read that I would recommend to fans. It definitely will not stand alone so make sure you read The Rise first!


Other books in this trilogy: