Review: Heir to the Jedi: Star Wars by Kevin Hearne 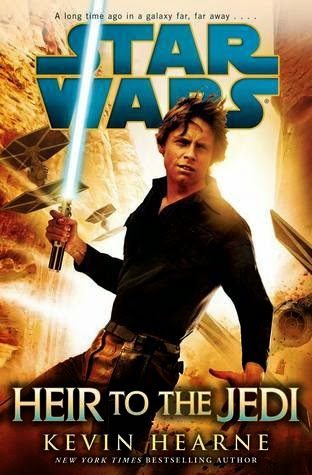 Heir to the Jedi: Star Wars by Kevin Hearne
Science Fiction, Adventure
Ebook/Print/Audio (305 pages, LUCASBOOKS)
A long time ago in a galaxy far, far away. . . .
A thrilling new adventure set between A New Hope and The Empire Strikes Back, and—for the first time ever—written entirely from Luke Skywalker’s first-person point of view.
Luke Skywalker’s game-changing destruction of the Death Star has made him not only a hero of the Rebel Alliance but a valuable asset in the ongoing battle against the Empire. Though he’s a long way from mastering the power of the Force, there’s no denying his phenomenal skills as a pilot—and in the eyes of Rebel leaders Princess Leia Organa and Admiral Ackbar, there’s no one better qualified to carry out a daring rescue mission crucial to the Alliance cause.
A brilliant alien cryptographer renowned for her ability to breach even the most advanced communications systems is being detained by Imperial agents determined to exploit her exceptional talents for the Empire’s purposes. But the prospective spy’s sympathies lie with the Rebels, and she’s willing to join their effort in exchange for being reunited with her family. It’s an opportunity to gain a critical edge against the Empire that’s too precious to pass up. It’s also a job that demands the element of surprise. So Luke and the ever-resourceful droid R2-D2 swap their trusty X-wing fighter for a sleek space yacht piloted by brash recruit Nakari Kelen, daughter of a biotech mogul, who’s got a score of her own to settle with the Empire.
Challenged by ruthless Imperial bodyguards, death-dealing enemy battleships, merciless bounty hunters, and monstrous brain-eating parasites, Luke plunges head-on into a high-stakes espionage operation that will push his abilities as a Rebel fighter and would-be Jedi to the limit. If ever he needed the wisdom of Obi-Wan Kenobi to shepherd him through danger, it’s now. But Luke will have to rely on himself, his friends, and his own burgeoning relationship with the Force to survive.Author Site: website

My first reaction when I heard we were getting a Star Wars novel written by Kevin Hearne was a gleeful fistpump. It seemed like a perfect combo, my biggest fandom written by an author with the panache to make druids cool and the creative mojo to see a world where multiple pantheons could dwell. Yep, I was digging it. But as I began to turn the pages and dive into HEIR TO THE JEDI I quickly realized that either Hearne was playing it very safe or the editor had heavily reigned in any attempt at doing anything interesting with this story.

To put it bluntly, this book was as entertaining as watching paint dry for the first 11 chapters. It was painful to read and as my friends and spouse (who knew I had an ARC) begged for my thoughts I had to keep repeating that I thought it would get better. It did. Kind of. At Chapter 12 the pacing picks up a lot but unfortunately I never really felt like I was reading a Star Wars novel. Both for issues with the lack of action and the world building elements that weren't well utilized.

Whether it's something resulting from the canon laws of SW fiction now or maybe Hearne holding back or the editor's choices, one of the most agravating parts of HTTJ is all of the Earthy stuff. One of my favorite things about reading SW books in my teens was being taken away to worlds where the food was foreign, the tech was a bit ridiculous, and the analogies were often amusingly weird. There's nothing particularly alien about buckwheat noodles or tying your captives up with rope. It was extremely disappointing and so distracting that I was making mental notes of it for this review. Are sandwiches and soup universal enough they exist in SW? Sure, but let's blue milk it okay?

The central purpose of the story in terms of its place within SW canon is to establish Luke's dabbling with the Force so we can go from Ep. IV to V with his ability to pull his lightsaber in the wampa cave. That's one of the only parts of the story that I sort of could glom onto. Alas, most of the actual story is spent running and hiding and eating and talking. The relationship between Luke and Nakari felt forced to me and I saw where it was going before I even read the first page. Even if I love romantic subplots I would have been totally cool with them just becoming close platonic friends instead of having awkward flirtation.

What redeemed it from being totally bad was that for all its faults I did find one aspect enjoyable. I really liked Drusil, the cryptographer being rescued, and Luke's interactions with her. I found the challenges he faced in communicating with her to be amusing. I always enjoy the aliens and their cultures when I read SW fiction and both the Givin and Kupohan were interesting, I'd have happily read more about them.

Ultimately, HTTJ was not the SW novel I was hoping for. I was left thinking it was neither good, nor particularly bad. It's the sort of read that you know could have been much more in either direction but it played it too safe and therefore wound up being the type of story where when your fellow Star Wars geeks ask what you thought of it you just shrug and mutter a meh. I would love to see Hearne have another crack at a SW novel but with a completely new and unestablished character set where no one has expectations on who they are. He is one of my favorite writers but I think being sandwiched in between the two films and writing Luke Skywalker killed any potential for a truly amazing book to come of it.