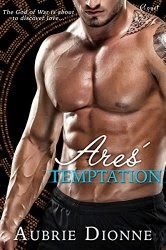 Ares' Temptation by Aubrie Dionne
Paranormal Romance, Mythology
Ebook (147 pages, COVET)
The God of War is about to discover love...
At the wedding of two Greek gods, Kaye Underhill is the only mortal in a sea of scantily clad nymphs and fickle satyrs. And worse - she's dateless. The only bright side is the hot, muscled hunkiness of the God of War, who's seated next to her. But there's no way Kaye could ever grab a god's attention... Is there?
Ares is in big trouble. A vengeful witch curses him, and the first person he touches will steal his strengths, while he receives their weaknesses. When Kaye trips, Ares catches her and poof! His powers disappear, and Kaye suddenly has the strength and coordination of a Greek god. To break the curse and regain his powers, Ares must get Kaye to fall in love with him.
But for the god who makes war, making love presents a whole new set of problems...Author Site: website

Who knew the God of War had a sweet side? (4 stars)

When the God of War has his powers swapped for the weaknesses of human, Kaye Underhill, things couldn't get much worse. Ares can't tell the formerly clumsy Kaye that the reason she's suddenly strong and agile is because she got his powers thanks to a curse. But if he can get her to fall in love with him the curse is broken and he can get back to protecting Olympus. Coaxing Kaye's heart, however, proves to be just as dangerous for Ares' own.

I was pretty wary of ARES' TEMPTATION because it's the companion novel to PAN'S CONQUEST which I didn't enjoy. So I am really, really happy to say that the issues I had with the latter were not present in the former. In fact, the chemistry I felt between Kaye and Ares was the best part!

While it's not a particularly long story and the courtship is rushed along by the plot, I was surprisingly swept up in the romance. Kaye was a likable character before but she's even better as Ares' foil. His growth from brooding warrior to caring protector is well done and I had a moment there where I just 'awwwww'-ed over how great he had become.

A short and sweet paranormal romance that's heart-felt I would recommend this one as a great rainy day read when you need cheering up. Those who want steamy love scenes won't get anything more than kisses but sometimes that's just the kind of read I want and it really suited the story here.